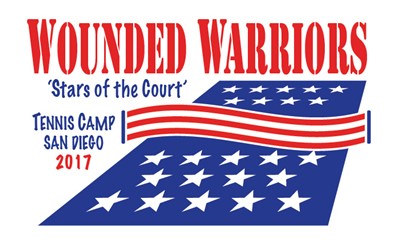 Over 50 U.S. Service Members and Military Veterans Will Participate

Over 50 wounded, ill, and injured service members and military veterans from across the country will participate in the Tennis Camp, which is being hosted by the San Diego District Tennis Association (SDDTA), in collaboration with the United States Tennis Association, Naval Medical Center San Diego, and the Balboa Tennis Club.

The camp, which will offer on-court sessions from 10:30 a.m. to 12:30 p.m. and from 1:30 to 3:30 p.m. each day, will focus on helping participants improve their tennis skills through game-based clinics and instruction in an upbeat, fun-filled atmosphere.  The camp also provides emotional benefits and helps with community re-integration.

Fundraising efforts are currently underway to help cover all participants’ airfare, lodging, meals, transportation, tennis equipment and instruction. The San Diego District Tennis Association is accepting contributions through its 501(c)(3) fiscal agent, Tennis Lovers For Charity, which are tax deductable. Checks may be made to “Tennis Lovers for Charity” and mailed to SDDTA, 2221 Morley Field Dr., San Diego, CA 92104.

“This tennis camp continues each year to touch the lives of these special service members and military veterans in such a positive way,” said Steve Kappes, Director of Military Outreach for the SDDTA. “We certainly could not hold this camp without the support of many local and national organizations.”

The camp will be led by Balboa Tennis Club’s Tennis Director, Geoff Griffin, a USPTA-certified teaching professional for over 25 years, and other professional tennis instructors from the club. All have been involved in the club’s Wounded Warrior Tennis Program since its inception in 2009. Support staff from Naval Medical Center San Diego will assist, along with trained volunteers from the tennis community.

About the Wounded Warrior Tennis Program – Since 2009, the Balboa Tennis Club, in collaboration with Naval Medical Center San Diego (NMCSD) and the San Diego District Tennis Association, has provided hundreds of free weekly tennis clinics to more than 800 wounded, ill, and injured service members and veterans from all the military services as part of NMCSD’s Wounded, Ill, and Injured Wellness Division of its Health and Wellness Department.

These military tennis clinics and tennis camps have been recognized for their excellence and impact by Congressional and local representatives, senior officials from the Department of Defense and Veterans Affairs, and the leadership of the United States Tennis Association. They have become the model for similar tennis programs for wounded, ill, and injured service members and veterans that have been established at other major military medical centers, Warrior Transition Units, and VA hospitals across the country.

The Wounded Warrior Tennis Program has made a positive impact in the lives of wounded, ill, and injured service members and veterans. Therapeutically, tennis has helped them work on eye-hand coordination, balance, ability to transfer weight, endurance, strength, and overall fitness. In addition to the physical benefits, tennis enables them to learn a new sport, promotes socialization, decreases stress and anxiety, and helps with re-integration into the community.