(April 29, 2017) France’s Kristina Mladenovic ended Maria Sharapova’s run in Stuttgart on Saturday. In her fourth match back on the WTA tour since returning from a 15-month doping suspension, the Russian let a set and a break lead slip to the Frenchwoman 3-6, 7-5, 6-4 in a two-hour and 38-minute contest.

“I would have loved to have used more opportunities when I was up a set and a break,” said Sharapova. And I think I lost 12 out of the next 14 points. So, I definitely had a bit of a letdown and I think that allowed her to get back in the match and gain confidence and start competing again and I just didn’t keep putting the pressure and I think when you are able to give that to a player, that’s played very well this year it can become very dangerous.” 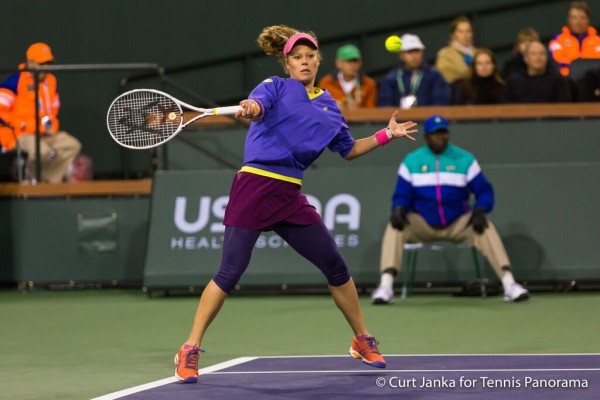 After her quarterfinal win on Friday, the 23-year-old Frenchwoman, who was not in favor of Sharapova receiving a wildcard into the tournament commented: “In sport nowadays it is also about the media and business. Maria is a big name, who makes people come to watch her.”
“On one hand, I totally understand the tournaments want her in the draw, because she is very famous and they want more attention, which is part of the business.”
“Of course, she is authorized to play tennis again, but why would she get that extra help compared to other players?”

Sharapova who came into the tournament with no ranking due to her suspension for using meldonium, will be in need of a wildcard to get into Roland Garros. She will be ranked around No. 260 on Monday.

Next stops for the 30-year-old five-time major winner will be Rome and Madrid, where she received wildcards. All of this in preparation for the French Open, if she is able to play the event.
“I’m moving in Europe in the next couple of months and this is what I want to go through,” she said. “I want to go through the matches. I want to see how my body responds, how I feel. I want to feel that match play, I want to feel the tiredness of match play.”
“That’s what I asked for. That’s what I wanted and I’m doing it.”

World No. 49 Siegemund has a 1-0 record against Mladenovic, there only meeting came last year in St. Petersburg.