(May 13, 2017) Rafael Nadal snapped his seven-match losing streak against Novak Djokovic on Saturday, dominating the world No. 2 6-2, 6-4 to reach the final of the Madrid Open. The last time Nadal defeated Djokvovic was in the 2014 final of the French Open.

Djokovic, who was the defending Madrid champion had won 15 straight sets over the four-time titlist. The Serb still leads the head-to-head against the Spaniard 26-24.

For Nadal it’s his 14th straight victory and an ATP World Tour leading 33rd match win on the year.

“I have been playing well,” Nadal said of the win.  “I think it was a great first set. I hit good the forehand in the first set, good the backhand, too. I was serving well.

“When I was playing that well at the beginning, it’s true that I felt for moments under control, and in the second not. In the second, the match was much more equal, and anything could happen.

“It’s true that I played a little bit shorter. I changed less directions in the second set. I needed to play more shots down the line with my forehand.

“But that’s normal, no? An important match for me. That’s it. But in general terms, I think I played a great match.”

Asked about how important it was to break the losing streak against Djokovic, Nadal said: “It’s one more match. What’s important to me is to make it to another final. As years go by, depending on the type of victories, can fulfill you a little bit more or less. As time goes by, what is important is the titles, not the opponents that you have beaten. It’s just the titles that you have won.

“It’s true that some matches are more important than others. But I’m just here to try to make it the best possible way, to play my best tennis, and of course to beat an opponent such as Novak, it gives you a lot of confidence. It shows you you’re working in the right way.

“But it’s just another match. As I said yesterday, it gives me another opportunity to win another title, which is important to me.” 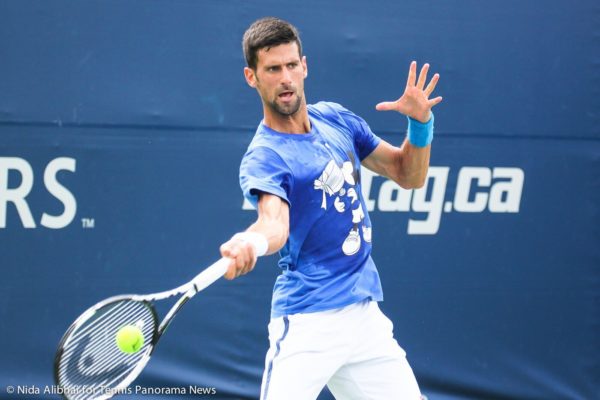 “Rafa was obviously a better player today,” Djokovic said. “He deserved to win. I mean, he was controlling the game from beginning to the end.

“Second set was a bit closer. Maybe I had some chances to be in the lead, 2-All. Was a long game. I lost the break there.

“But, you know, all in all, I did try my best. It wasn’t a very high quality of tennis from my side. I mean, I made a lot of unforced errors, especially first set.

“Just his quality was very high. You know, he managed to do whatever he wanted really, especially in the first set. I was getting a lot of balls back. He was serving well. He was using his court positioning well.

“Today was warmer than last three, four days, so conditions were quite different. The ball was bouncing very high.

“Well, he managed to be better in these kind of conditions.”

Djokovic, who has not so far had a good season by his standards, winning only one tournament this year, and fresh off of parting ways with his coaching team was happy to reach the final four in Madrid. “Well, first of all, it was really good to play in semifinals of big event, and to play against one of the top rivals I have in my life. I haven’t had that feeling in months, so it’s great to feel that.

“It was a positive week, a positive experience. I take, as I say, more positives than negatives into the next week in Rome. As I go along, I hope to continue getting better and getting stronger.

“I felt like I was playing well throughout the week. Today maybe slightly I could have played better. But, again, I just had an opponent that was too good.

“Well, I have to move on. Semifinals is a good result. Hopefully I’ll have another good result in Rome.” 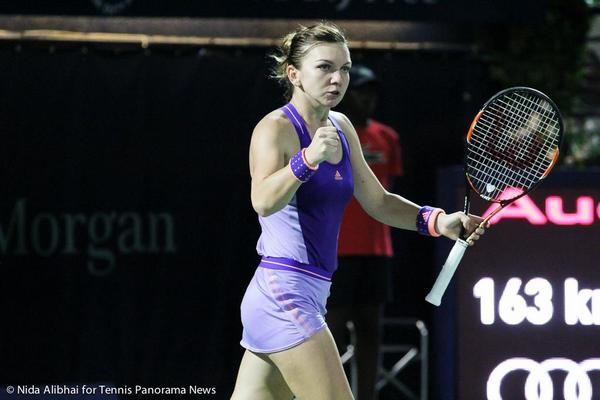 In the women’s final, defending champion Simona Halep held on to the title with a 7-5, 6-7, 6-2 over Kiki Mladenovic just under three hours.

“I feel great that I could defend this title,” Halep said afterwards. “It means a lot because it gives me confidence for the bigger tournaments.”

There was controversy during the trophy presentation when former player Illie Nastase was on the podium with Halep. Nastase has been banned from all ITF events due to his behavior at Fed Cup.

#WTA CEO Steve Simon has released a statement following the conclusion of the Mutua Madrid Open on Saturday. pic.twitter.com/wO2pnfazAk 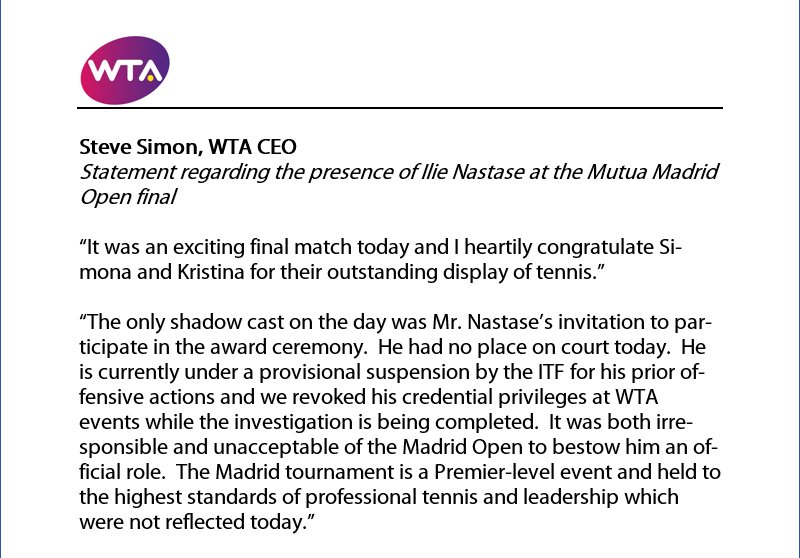 For the No. 3 seed Halep this was her 14th career title.

“It’s going to be a tough match whoever I face tomorrow,” explained Nadal. “That’s the reality. We’re saying I will be playing against Thiem. He’s No. 3 in the Race, came from the final in Barcelona. He’s young, has a lot of talent. I think the altitude helps him here. The ball bounces high and it’s difficult to control.

“Talking about Pablo, it’s more or less the same. He is doing really well. He played really well in Monte-Carlo, when he beat Wawrinka. Playing really well, then he lost after that. But it was a very tight match, too.

“Whoever is my opponent tomorrow, it’s going to be a very tough match. The only way to win these kinds of tournaments, because you are playing some of the best players in the world, so you have to play at a very high level to be able to beat them.

“This is my goal. This is what I’m thinking right now, to play really well. That’s the only way to be able to have options for tomorrow’s match.”

Nadal will be going for his fifth Madrid title and 30th Masters 1000 crown.

“It means a lot to me to play a finals. My first finals in this level,” Thiem said.

“These kind of tournaments are so strong, so it’s amazing for me to go that far. I’m very happy at the moment.”

Thiem lost to Nadal in the final of Barcelona in straight sets two weeks ago.

“I think he played a very, very good match in Barcelona. First set there was I think close. I also played well.

“But obviously even if I’m at my best and he’s at his best on clay, probably he’s the better player. If you see his records on this surface, it’s just amazing.

“But, yeah, tomorrow is a new day. I will try to improve the things I didn’t do that good in Barcelona and then we will see what happens.”