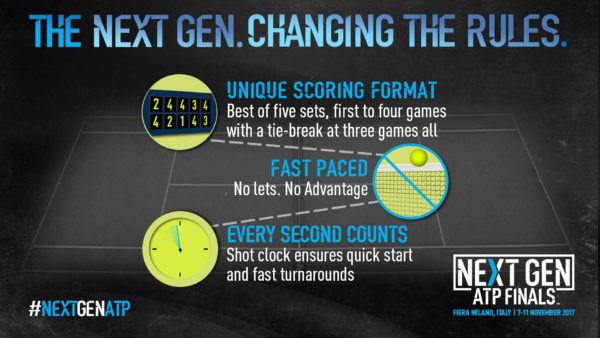 From ATP World Tour: (May 16, 2017)ROME – The ATP has announced a series of rule changes and innovations set to be trialled at the Next Gen ATP Finals in Milan this November. The season-ending tournament will see the world’s top 21-and-Under players of the season competing for total prize money of US$ 1.275 million from 7-11 November.

The rule changes, aimed at creating a high-tempo, cutting-edge, and TV-friendly product, are geared towards attracting new and younger fans into the sport, while at the same time retaining the sport’s traditional fan-base. The following rule changes will be applied in Milan:

In addition, a ‘free movement’ policy will be applied to the crowd (except behind the baselines) throughout the tournament. The policy will enable fans to move freely in and out of the stadium during matches, providing a relaxed fan-friendly atmosphere and ensuring fans are not restricted entry into the stadium at any time.

The ATP carried out extensive market research and fan surveys across more than 13 different markets through SMG Insight, covering off traditional and emerging tennis markets, as well as light and heavy tennis consumers, prior to determining which rule changes to trial at the inaugural tournament, which will take place at Fiera Milano in partnership with the Italian Tennis Federation and the Italian National Olympic Committee.

Chris Kermode, ATP Executive Chairman & President, said: “We’re excited to be bringing something new to the table with this event. The sports & entertainment landscape is changing rapidly, as are the ways in which fans are consuming our sport. This event is not only about the next generation of players, but also about the next generation of fans. We’ve created this new tournament precisely to allow us to look at some potential new elements, in a high-profile environment. We remain acutely aware of the traditions in our sport, and we will be sure to safeguard the integrity of our product when assessing if any changes should eventually be carried forward onto regular ATP World Tour events in the future.”

Angelo Binaghi, President of the Italian Tennis Federation, said: “We are proud to be at the forefront of innovation and change in tennis through this unique event, with the future stars of the sport that will be making headlines on the biggest stages over the next years. This tournament is all about looking to the future, and we would like to thank the ATP for having the vision and willingness to bring innovation into our sport. We look forward to a successful and exciting first edition of the event in November.”

Away from the court, fans and media attending the tournament will enjoy a fully immersive on-site experience, with a strong emphasis placed on unparalleled fan engagement through digital media, combined with unique player access across the tournament.

The tournament will take place on a singles-only court, featuring the best seven qualified 21-and-Under players of the season, plus one wild card. Taking place over five days, the event starts off with two round robin groups, followed by the semi-finals and final. A third place play-off will also be played by the two losing semi-finalists prior to the final on the last day. The tournament does not offer Emirates ATP Rankings points.