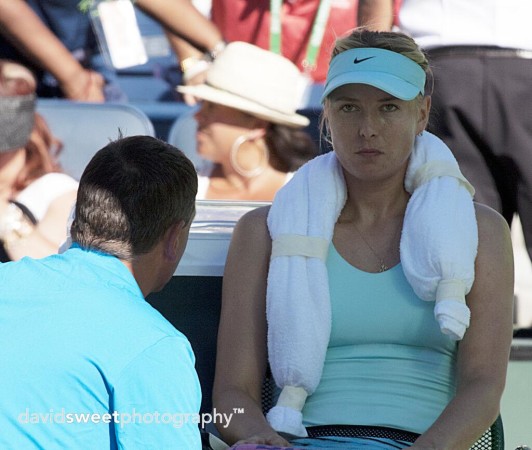 (May 16, 2017) Two-time French Open champion Maria Sharapova has been denied a wild card entry into the French Open.

“I just wanted to tell you that I decided not to give to Maria Sharapova a wildcard – the wildcard that she asked me,” Guidicelli said.

“Nobody can deprive her two titles she won here in Roland Garros. But those two titles she (won) them according to the rules. I really read the articles, 101, of the CAS, which reduced her sanction. However we agreed with the independent tribunal panel that she has committed a violation of the anti-doping tennis program. And she had to be suspended for 15 months.

Sharapova, back from a 15-month doping suspension did receive wild cards into Stuttgart, Madrid and this week’s Rome event.

The Russian’s ranking was not high enough to make the qualifying event at Roland Garros, as she was out site the top 200.

Sharapova lost her second round match in Rome to No. 16 seed Miriana Lucic-Baroni 6-4 3-6, 1-2,  when she was forced to retire with a left leg injury.

Sharapova did not have a news conference but out out the following statement:

“I thought it was pretty good match up until the end, which was obviously weird,” said Lucic-Baroni. “You never want to finish a match like that. I mean, it’s unfortunate. I wish her a speedy recovery. I hope it’s nothing bad.

“I thought we played well. I thought I played really well first set. Just kind of that one game where I made two double faults in a row in the second set to lose my serve. I kind of let it slip away a little bit the match from there.

“Yeah, that was my bad, but she’s a great player. She keeps that pressure on you and sometimes things like that happen.”

Asked about the decision of the French Open not to give Sharapova a wild card, Lucic-Baroni said:

“But you want to talk about proper and proper rules, and we are a tour that’s been a tour for a long time, the fact that there isn’t a rule on people who failed doping tests, and whether or not they can get a wildcard, whether or not they should, it’s a very strange thing because we are professional, and that should be in place.

“So I feel that it is the right decision. It is the correct decision. I feel it is, let’s say, brave of them, because everybody is pressured. People want to see Maria. That’s fine.

“You can do whatever you want to say. You fail a doping, you fail a doping. That’s it. I think there is — it’s really black and white. You guys make it, you know… It doesn’t go into my bank account or from it, so I can say honestly what I think.

Sharapova’s ranking, which was outside the top 200 coming into this week, is not high enough to be able to play the qualifying at Roland Garros. The French Open main draw begins on May 28.