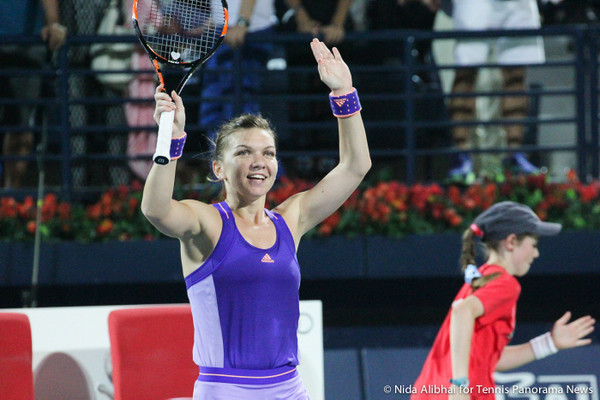 “I just sat down at 5- 2, and I said that the match is lost. That’s it. It’s over,” Halep said to media. “And then I started to feel more relaxed, maybe because I thought it’s finished, and it came.”

“But I believed that it’s gonna come, it’s gonna turn something around, and that’s it. I’m just happy. I am not thinking about how it was. I just take the fight thing, that I was fighting till the end, and I enjoy.”

“I think today I showed that I’m stronger mentally. I stayed there till the end.”

Halep lost in the final of the 2014 French Open to Maria Sharapova.

Halep will also be in a battle not just to advance to the final but to reach No. 1. Should she beat Pliskova and win the title, she would become No. 1. Should Pliskova win she’ll be No. 1.

Halep, who was runner-up at Roland Garros in 2014, will next face second-seeded Karolina Pliskova.

“There were few ppl who told me, You have to be in the final to be No1. I was like, there’s no chance I make the final. And now it’s close.” pic.twitter.com/OiuPoA9CMV

“Before this tournament I was struggling on clay with almost everything,” Pliskova said. “I didn’t have my weapons on my side and the movement was terrible.

“I don’t think it’s better, but somehow I’m just winning. Today I can finally say I felt a little bit better on the court compared to the last matches.”

“We’ve played few times,” Pliskova said of her next challenger. “It’s definitely is gonna be tough. She’s running well. I don’t know the weather forecast for tomorrow. If it’s like this, it’s gonna be tricky, because she’s almost everywhere and not missing much.

“I’m just gonna try to play like I have nothing to lose. I’m in the semifinals. I’ll just try to play my best tennis this time.”

Halep leads in their head-to-head 4-1.

“All in all, it was decided I think in the first set,” said Djokovic to media. “I tried. I lost that crucial break in the beginning of the second, and he started serving better, backing it up with the first shot. He deserved to win. He was definitely the better player on the court today.”

Theim will be taking on nine-time champion and fourth seed Rafael Nadal who advanced when No. 20 Pablo Carreno Busta had to retire from the match with an injury whith Nadal up 6-2, 2-0.

“It’s great for me to be in the semifinals again, to defend that,” No. 6 seed Thiem said. “And of course, I think on Friday, the toughest opponent ever here in Roland Garros. It’s going to be the fourth match against him in five or six weeks. Not really any big secrets. He’s again in his best shape. So it’s going be the toughest match that you can imagine.”

Theim handed Nadal his only loss of the clay season in the quarterfinals of Rome.

Just 12 months ago Djokovic was holding all four majors.

“The win here last year has brought a lot of different emotions. Obviously, it was a thrill and complete fulfillment, I guess,” Djokovic said.  “I have lived on that wave of excitement, I guess, ’til the U.S. Open or so. And at the U.S. Open, I just was emotionally very flat and found myself in a situation that I hadn’t faced before in (my) professional tennis career.”

Djokovic: “I’m trying, as everyone else, to work on the game and work on things. Sometimes it works; sometimes it doesn’t.” #RG17 pic.twitter.com/hrBVCEGI8x

Djokovic, who split from his longtime team and brought on Andre Agassi for the first week of the French Open said:

“It’s obviously tough to get out of it and figure out the way how to move ahead. At least I’m trying.”

“I know that I have achieved the biggest heights in this sport, and that memory and that experience gives me enough reason to believe that I can do it again.”

There’s something about Paris…@andy_murray advances to 4th straight #RolandGarros semifinal with 2-6 6-1 7-6(0) 6-1 win over Nishikori. pic.twitter.com/w7l73a0bY5

Rafa on PCB:”Obviously wasn’t the perfect way to win, especially vs a friend. Tough when these things happen but he had a great event” #RG17 pic.twitter.com/rrhBKQBkDq

Nadal, Theim and Wawrinka march into the semifinals without dropping a set.