(June 8, 2017) In a battle between women celebrating birthdays, No. 47th-ranked Jelena Ostapenko of Latvia became the first unseeded woman to reach the Roland Garros final since 1983, when she beat Switzerland’s Timea Bacsinszky 7-6 (4), 3-6, 6-3 in the semifinals on Thursday in Paris.

Ostapenko goes into the final having never won a title on the WTA tour. The last person to win a major as their first tournament victory was 1997 French Open winner Gustavo Kuerten on June 8 – the day she was born.

After the match while being interviewed on court by former player Marion Bartoli, Bartoli led the crowd in singing “Happy Birthday” to Ostapenko.

For the birthday girl who lost, Bacsinszky, 28, it was her second trip to the French Open semifinal. Two years ago she lost to Serena Williams.

“I’m really happy,” Ostapenko said. “I love to play here, I love you guys, you’re amazing, thanks for coming to support me. I’m just happy with the way I celebrated my birthday.” 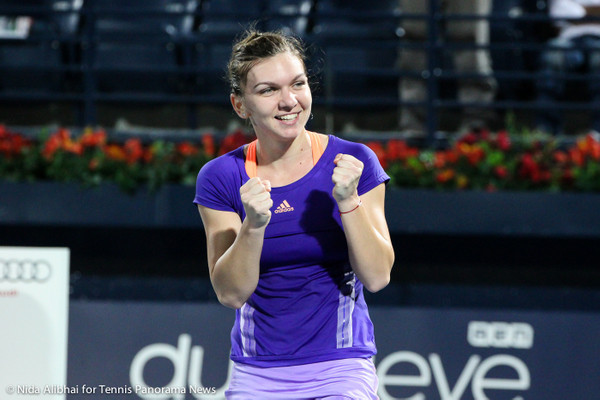 Just 24 hours before her semifinal, Halep came back from being a set and 5-1 down to reach the final four. The 25-year-old Romanian remained steady and played incredible defense in her victory over Pliskova. The win keeps her hopes alive for attaining the No. 1 ranking. Should she win on Saturday, she would move into the top spot.
“It’s a great feeling. What can I say?” she said to media. “I feel like I have more experience. I’m happy, but I’m not that excited. I’m looking forward, actually, to play the final.
“Today was a great battle. Every point was very important. I felt that I had to run for every ball, be focused for every ball. So, I’m happy with my performance.”

As for her opponent in the final, “I never played against her. I don’t know what to expect from her. I saw a little bit of her match today. In my opinion is similar to what I had today, so maybe’s gonna be the same plan,” Halep said.