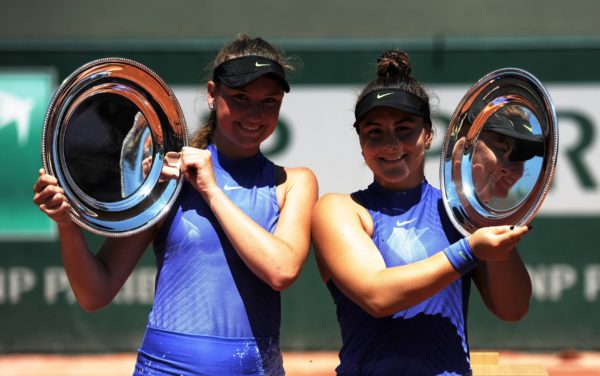 The No. 1-seeded all-Canadian duo ousted Russians Olesya Pervushina and Anastasia Potapova 6-1, 6-3 in 57 minutes on the clay courts to claim their second straight Grand Slam together. The pair also won the Australian Open in January for their first major titles.

This is the second trophy a Canadian has claimed at this year’s Roland Garros, as Gabriela Dabrowski made history by becoming the first homegrown woman to win a Grand Slam on Thursday, taking home the mixed doubles crown alongside Indian partner Rohan Bopanna. This marks only the second time Canada has captured more than one title at a Slam behind 2012 Wimbledon (Eugenie Bouchard in girls singles and doubles and Filip Peliwo in boys singles).

Dating back to the US Open in September 2015, Canada has now been represented in the finals of seven straight Slams between the pros and juniors. The streak began with a Junior US Open doubles title courtesy of Felix Auger-Aliassime and Denis Shapovalov nearly two years ago.

In 2016, Daniel Nestor was a runner-up in men’s doubles at the Australian Open before Auger-Aliassime made the junior boys final at Roland Garros. At Wimbledon, three Canucks featured in finals – Milos Raonic fell in the men’s singles championship match, and Shapovalov captured the junior crown before teaming with Auger-Aliassime to finish second in the boys doubles draw. And finally, Auger-Aliassime regrouped from his earlier losses to claim the Junior US Open singles crown, and a runner-up finish in doubles with fellow Canuck Benjamin Sigouin.

So far in 2017, Andreescu and Branstine are two-for-two in girls doubles finals, combined with Dabrowski’s historic victory.