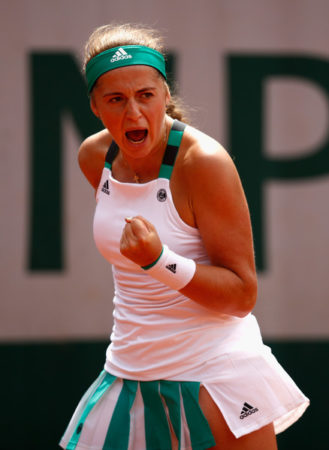 She denied the Romanian both a major and the No. 1 ranking. Had Halep won, she would have moved up to No. 1 in the world.

“I still can’t believe I won,” the 20-year-old Ostapenko said on court after the win. “It was always my dream, when I was a child I was watching players here. I’m just so happy. I’ve just enjoyed it so much. I have no words.”

Halep looked as though she was on her way to her first major leading 6-4, 3-0 with points for 4-0.  Ostapenko held her nerve and won six out of the next seven games to level the match.

Ostapenko had to fight back again in the third set, from 1-3 down, winning the next five games.

Luck was on the Latvian’s side when holding for a 5-3 lead in the third, she hit a backhand that ticked the top of the net, which appeared to be going out but fell in on Halep’s side of the net.

“I’m really happy to win here,” Ostapenko said after the match. “I think I still cannot believe it, because it was my dream and now it came true.

“I think I’m going to only understand in maybe couple of days or couple of weeks.”

This is only Ostapenko’s eight major tournament that she’s played in.

“All the credit for what you’ve done,” Halep said to Ostapenko during the trophy presentation. It’s an amazing thing. Enjoy, be happy, and keep it going, because you’re like a kid.”

A clearly disappointed Halep said she was sick to her stomach with emotion and that maybe she was not ready to win the title.

“It’s a tough moment for me, but it’s gonna go away, I hope, with time. I will keep working, because I really want to repeat what I have done this tournament. We will see what is gonna be.”

“I knew I’m already in the final and I’m playing such a great player like Simona,” noted Ostapenko. “I was losing 6-4, 3-0, and then in my mind I was just like, ‘I’m just going to enjoy the match, and I will try to fight until the last point.’

“And then I stayed aggressive and the match turned my way.”

Ostapenko came into the tournament ranked No. 47, she leaves with the No. 12 ranking going into grass court season. Halep moves up to No. 2 in the world.

“I really enjoy to play here. It’s a really great time, I really love to be he.re”