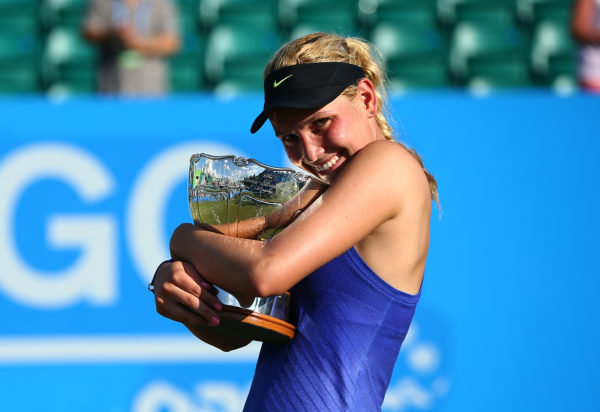 NOTTINGHAM, ENGLAND – JUNE 18: Donna Vekic of Croatia lifts the trophy after victory in her Women’s Singles Final match against Johanna Konta of Great Britain during day 7 of the Aegon Open Nottingham at the Nottingham Tennis Centre on June 18, 2017 in Nottingham, England. (Photo by Jordan Mansfield/Getty Images for LTA)

The 20-year-old Vekic upset the WTA International tournament top seed and British No. 1 in just under two-and-a-half hours.

After lifting the Elena Baltacha Trophy, which is named after the late former British No. 1, Vekic said: “It is something I have been dreaming of since I got my first title and something that kept me going, because this feeling is amazing. There’s no way to describe it. It just keeps me motivated to work even harder.

“To be honest, I really didn’t expect to win today. I was just hoping to get into the match, especially after the first set because I was struggling to find rhythm. I was just trying to focus on myself, serve as well as I can and try to be aggressive.”

“It’s pretty amazing. I’m really happy. The last time I won a final, I wasn’t allowed to have champagne.”

“Credit to her for playing incredibly well, especially at the end,” Konta said. “I’m very happy that I got to play five great matches on the grass. We just want to get as much time on the surface as possible heading into Wimbledon. I’m really happy that I got to come back and play here in Nottingham.

“Overall, I think I fought and played the best that I could today. There are things that I would have liked to have done better, but I think the majority of the credit has to go to Donna. She continuously raised her level as the match went on. She served better and better so I do think she definitely won it in the end.”

For Vekic, it’s her second WTA tournament title. She won her first back in 2014 in Kuala Lumpur. It’s also her second win over a Top Ten player.

In the Netherlands, unseeded Anett Kontaveit of Estonia won her first title on the WTA tour, beating Natalia Vikhlyantseva 6-2, 6-3 to win the Ricoh Open at ‘s-Hertogenbosch.

The win moves her ranking up to No. 36, a career high for her.