You are here: Home / Contributors / From London to Rio to Santiago for Davis Cup 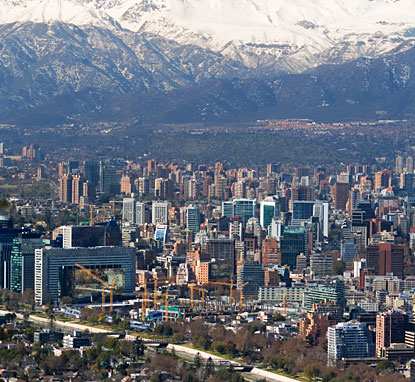 Peter, Eileen and Holly Barnes-Wallis are part of a group called the Netheads – these tennis fans cheer on the United States Davis Cup team. They will be blogging about their experiences during the USA-Chile Davis Cup tie this weekend in Santiago.

SANTIAGO – March 2, 2011 – Weâ€™re Netheads and weâ€™re Brits â€“so, for us, itâ€™s a long way to go to Chile for just for three days tennis.Â  So our trip to see the USA play Chile in the Davis Cup has been turned into a small tour of South America!

We started in Rio de Janeiro.Â  Its landmarks are truly spectacular and the weather was great.

Weâ€™re now in Santiago and our first impressions (apart from lengthy delays at the airport) are very positive.Â  Clear, blue skies, magnificent buildings, and all against a backdrop of the Andes Mountains.Â  And on top of that, weâ€™re going to see tennis!

Weâ€™re meeting up with the other Netheads Thursday Night (I think 13 have made the trip) and Friday weâ€™ll see Andy Roddickâ€™s return to Davis Cup tennis, when he opens the US account with his match against Nicolas Massu.Â  On paper Roddick must win â€“ but this will not be played on paper â€“ but on clay!Â  Still, our money is on Roddick. Much more in our Friday entry when the matches begin.