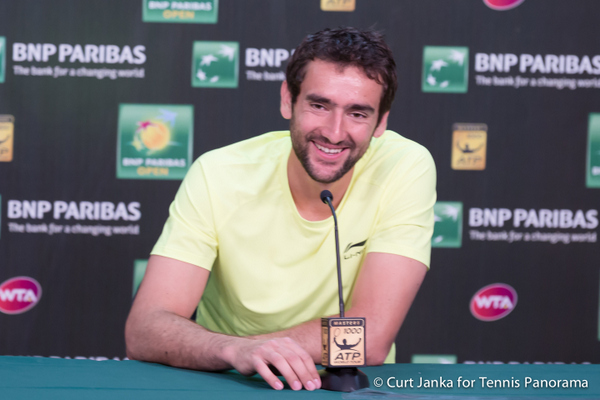 LONDON (June 22, 2017) The last couple of days have been dominated by the weather.

Britain doesn’t know what to do with itself when the sun comes out. In mid-winter, a touch of the yellow stuff can be enough to make people eat outside. On Wednesday, however, when the temperature officially hit 90F, they just wilted. On the court, despite the grass, it was even hotter, since no shade is provided. A day later, the temperature had dropped 15 degrees and there was cloud cover.

Tennis players are supposed to be able to cope – but this is part of why grass requires adaptability. On Tuesday, Milos Raonic noted after losing to Thanasin Kokkinakis that heat changes grass courts: “When it’s a little bit hotter, the court gets a little bit harder, and it sort of bounces up a bit, more like a hard court,” he said. “And it’s a little bit easier to move on, as well.” Not that it helped him.

The week’s pattern of rout-the-seeds continued on Wednesday as Gilles Muller’s big left-handed serve eliminated former finalist Jo-Wilfried Tsonga, who seemed philosophical and said that for Wimbledon, “I think I have to put maybe a little bit more energy in my game.” This week has been favoring the guy who’s been on grass the longest, and here Tsonga was playing his second grass-court match of the season, while Muller beat Ivo Karlovic last week to take the Rosmalen title.

But a week can only take so much excitement. In the rest of Wednesday, Donald Young beat Viktor Troicki 6-3,6-4; Grigor Dimitrov took out qualifier Julien Benneteau 4-6,6-3,6-4; and Tomáš Berdych restored something like normal service by beating qualifier Denis Shapovalov in the tightest and most watchable match of the day, 7-6,6-7,7-5. At 18 and two months, Shapovalov looks hugely promising for the next few months at least: he entertains with his shots, not his antics, and while he doesn’t smile as hugely, he radiates enjoyment reminiscent of Gustavo Kuerten’s breakthrough in 1997. Ranked 193 coming into the event, his two qualifying wins and first round dismissal of Kyle Edmund netted him 45 points; these should move him up into the high 160s. He’s basically been set loose on the tour with nothing to lose. This could be fun.

And so, left in the draw after all the drama are three of the draw’s original former champions – Dimitrov (2014), Cilic (2012), and Querrey (2010), though only one – Lopez – of its four former finalists (the others were Tsonga, Raonic, and Mahut, who lost in the first round to Medvedev).  Helpfully, these four players are all in separate quarters. Querrey meets Muller; Cilic faces Young; Dimitrov plays Medvedev; and Lopez, in what ought to be the day’s best match-up, takes on Berdych, who hasn’t made much of a showing here in any of his three appearances – but was the 2010 Wimbledon finalist.