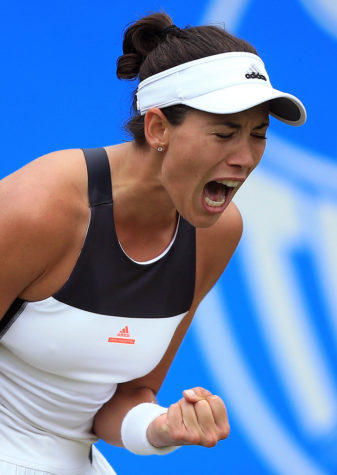 (June 23, 2017)  Two-time Wimbledon champion Petra Kvitova will take on her friend and Czech Fed Cup team-mate Lucie Safarova in the opening match on the Ann Jones Centre Court on Saturday in Birmingham.

Playing only her second tournament following hand surgery, Kvitova earned a semifinal spot with a 6-4, 7-6(5) win over Frenchwoman Kristina Mladenovic. Safarova had earlier scored one of the grittiest wins of her career to edge out Daria Gavrilova 6-7(4), 6-3, 7-6(5) in over three hours, saving match points. It marked the second time this week that the Czech had to save match points to advance.

“We practice a lot together. We know each other well from the Fed Cup” said Kvitova of Safarova.  “She’s playing well on the grass. I just think that we know each other well, on the court as well. And sometimes the score looks a bit easier, but it’s not always like that and it’s about a few points in the set. That’s how I think it will be tomorrow as well.”

2016 Roland Garros champion Muguruza progressed to the last four courtesy of a retirement when Coco Vandeweghe became hampered by a left foot injury. Muguruza, from Spain, is seeded sixth in Birmingham and is now the highest ranked player in the draw. She takes on 21-year-old Australian Ashleigh Barty in what will be Barty’s first WTA Premier semifinal.

Murguruza said: “I feel that I’m doing something good because I’m winning and I’m keeping alive in the draw. So I’m happy because I came here early to prepare, and I trained, I put hours (in) there. So I’m happy that what our team thought was going to be good for the tournament is working. So, so far we are proud that it’s working.”