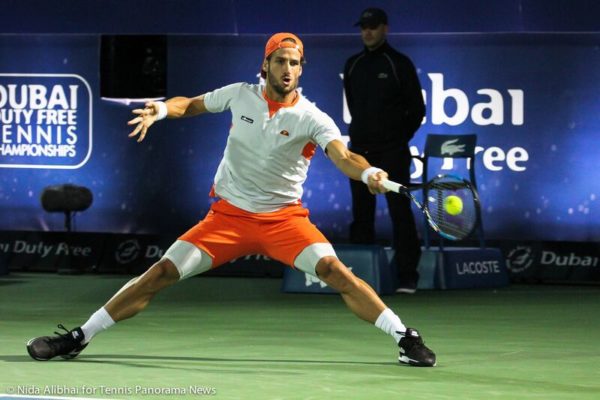 LONDON (June 24, 2017) The Queen’s final four consisted of two former champions – Grigor Dimitrov and Marin Cilic – plus former finalist Feliciano Lopez and interloper Gilles Müller. Müller, ranked 26 and the least-known of the four, still has some obvious grass credentials: he’s tallish (6’4″), has a lefty serve, and after reaching the Rosmalen semi-final last week (losing to Alexander Zverev) is at a career high.

The English weather, having uncharacteristically baked everyone earlier in the week, reverted to type for the weekend. The first match, Cilic versus Müller, started more than an hour late, and then was interrupted several times by spits of almost-rain. Fortunately, these ended reasonably quickly.

The second set was tight and, for Cilic, frustrating. “It was not easy to keep calm after not converting a lot of break points I had in that second set and then losing it,” he said afterwards.” It was the first time anyone had so much as held a break point on the Cilic serve all week. The third was settled by a single break, but it was enough. Cilic went through 6-3, 5-7, 6-4, and went off to get ready for the doubles.

In the second match, the players stayed on serve until 5-5, when Lopez grabbed his opportunity after Dimitrov double-faulted to give him a break point. Lopez served the set out with an ace, a service winner, a netted Dimitrov shot, and a return long that landed right between Lopez’s legs.

Left-handers have always had some advantage on grass: on the ad side they can hit a swinging serve to the right-hander’s backhand that skids off the grass and forces the receiver too far off court to make it back for the next shot. It’s not the only reason that players like Martina Navratilova, John McEnroe, Jimmy Connors, and Rod Laver were successful at Wimbledon, but it certainly helped. It clearly still doesn’t hurt, as half this week’s semi-finalists were left-handers.

In the second set, a hard-fought game on Lopez’s serve at 1-2 eventually went to Lopez. Dimitrov ran out a quick hold and then it was time for somewhat more vigorous almost-rain and a 45-minute delay. On resumption, Dimitrov took the second set but couldn’t hold the third. Lopez ran out the match 7-5, 3-6, 6-2.

Afterwards, Lopez said the court seemed little changed by the variation in the weather. “Conditions were windy a little bit. That’s it. The rest was very similar.” For tomorrow, he said, ” You can imagine how important it is for me to be in the finals of Queen’s at this stage of my career. It is one of the tournaments that you, first of all, you love. I was dreaming to play. When I was younger I was watching Queen’s all the time, and it’s one of those tournaments that you always want to play. For me, it’s so special to be in the finals.”