You are here: Home / Features / “Kind of a Fairytale”- Petra Kvitova Wins Birmingham For First Title Since Knife Attack 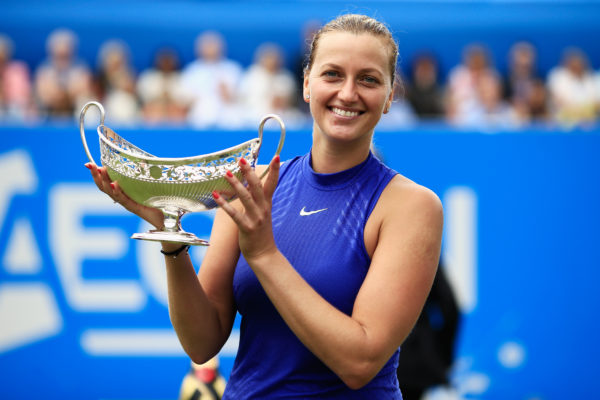 BIRMINGHAM, ENGLAND – JUNE 25: Petra Kvitova of the Czech Republic poses with the trophy after the Women’s Singles final match against Ashleigh Barty on day seven of the Aegon Classic Birmingham at Edgbaston Priory Club on June 25, 2017 in Birmingham, England. (Photo by Ben Hoskins/Getty Images for LTA)

(June 25, 2017) In just her second tournament back after six months off tour recovering from hand injuries from a knife attack in her home, Petra Kvitova is the new Aegon Classic Birmingham champion. The two-time Wimbledon champion rallied past Australian Ashleigh Barty 4-6, 6-3, 6-2 to win at the Edgbaston Priory Club on Sunday.

Barty is another comeback story. Back in 2014 she left tennis to play cricket. She came back to tennis last year and won her first WTA title in Kuala Lumpur.

For the 27-year-old Kvitova, this was the 20th title of her career, her first grass court trophy since winning Wimbledon in 2014.

“You know, all week the body and the mind is so intense, and today I was kind of nervous before the match and through the first set as well, and I was up and down in the match,” Kvitova said. “And when I didn’t play that many matches, it’s always taking me more energy, I think. But overall I’m very, very happy, of course. I didn’t expect this in my second tournament after my comeback. So yeah, I think it’s kind of a fairytale.

“I think I’ve been through a very difficult time in my life, and it wasn’t about the tennis, but about to come back healthy and alive and move my fingers properly and everything like that. And this is something clearly special. It’s some bonus to have in my life and my career and everything. And that’s what I fight that hard to come back to play tennis. And I always said that I’m not here just to play tennis. I’m here to play my best and to win trophies, like today. So I have to say I’m kind of proud of myself that I did it today.”

“It’s so amazing to have Petra back on the court,” noted Barty. “She’s such an inspiration. She’s always been a great champion but I think we appreciate that more now that she’s back playing week-in and week-out. Hopefully she is able to stay healthy and doesn’t have any more issues and I hope she has a really successful season.

“I think we have to be very happy with where the game is at. I’ve played some quality tennis and lost to only a couple of great players. So I’m really excited and I can’t wait to get to Wimbledon.”

Barty was still a winner on Sunday. She and Casey Dellacqua won their second Aegon Classic Birmingham title 6-1, 2-6, 10-8 win over Hao-Ching Chan and Shaui Zhang.