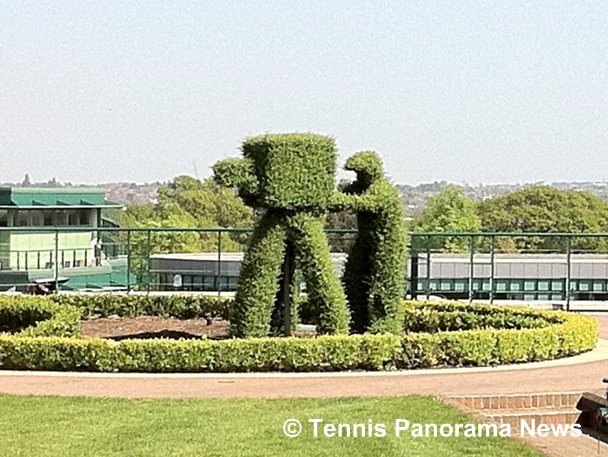 LONDON (June, 26, 2017)For some decades now, the week of the Wimbledon qualifying tournament has been a sort of local secret. People who cared to know, could find out that the qualifying event took place at the Bank of England’s sporting grounds at Roehampton. Yes: unlike all other tournaments, at Wimbledon, you don’t get to play there until you have qualified for the main draw. Currently, that means winning three rounds that whittle the qualifying draw down from 128 to 16 eventual qualifiers. This is part of what makes it so hard for qualifiers to get past the official first week: for them winning the tournament would mean winning ten matches in a row. On the other hand, it’s also why they pose such a threat to any top player who hasn’t found their feet on grass yet this year: they are already match-tight.

Those who attended knew that it was a very basic experience. No stands, not much in the way of refreshments, and no published information, and the courts were all lined up in a row with no space in between – but it was free, and on a nice day you could stand next to some netting and watch the action or sprawl on the hillside for a less intimate view. I have long thought that parents with aspiring tennis professionals should take them here, rather than to a major final because for many players this is the reality: playing on a back court with no press, no attention, and probably only watched by people you’re paying to be there.

Even just reading the qualifying draw is an exercise in realism. This year, jostling for admission to Wimbledon’s men’s singles are Lukas Rosol, famed for appearing out of nowhere to beat Rafael Nadal in 2012; the rising young American player Taylor Fritz, seeded 21; Marcus Willis, who qualified for Wimbledon last year for the first time at 26 and won his first-round match to earn a Centre Court appearance against Roger Federer; and veteran doubles player Rajiv Ram. The pressure is least on Fritz, who, ranked 132 at age 19, didn’t miss direct entry into the main draw by much and is at the beginning of his career. For Willis, ranked 387 at 27, the 70 points he has to defend from Wimbledon 2016 represent a catastrophic slide waiting to happen.

All change. This year, Wimbledon qualifying is being reinvented. A somewhat modest stand has been erected on one side of one of the courts, would-be spectators must purchase tickets online for £5 each, and the BBC has begun covering a selection of matches. History will record that the first televised match from Roehampton featured Benjamin Becker, the 208-ranked 36-year-old player who in 2006 sent Andre Agassi into retirement at the US Open, versus 180-ranked 25-year-old Yasutaka Uchiyama.