You are here: Home / Features / ESPN Broadcast Schedule for The 2017 Championships, Wimbledon 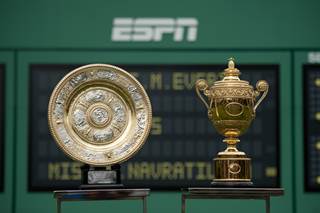 Through Thursday, June 29, all four days of qualifying are on ESPN3 and streamed live on the ESPN App, with all-day action starting at 6 a.m. ET from one of the grass courts at the Bank of England Sports Centre in Roehampton, not far from Wimbledon and the All England Lawn Tennis Club.  Qualifying for Wimbledon has never before been produced for distribution.

The three-box offering on WatchESPN for the semis and championships, Wimbledon Surround, includes angles focused on each player, in addition to the match.

The ESPN Tennis Team, the best in television, at Wimbledon:

ESPN.com will have previews, reviews, the latest news and videos and more:

ESPNDeportes.com will provide live scores and draws, in depth news and coverage of Latin American players, columns, blogs, live chats, video, highlights and news, including ESPiando Wimbledon that will recap the day’s play. The site will also feature Slam Central, a special index page dedicated to all four Grand Slams.

For a 10th year, ESPN will provide multi-screen coverage with commentary of five matches in addition to ESPN or ESPN2 network program through the second Monday of the Championships, on ESPN3, the ESPN App and DirecTV.  Fans will also receive interviews, features, press conferences and studio analysis from the All England Club.  Trey Wingo will return as host, joined in the studio by Rennae Stubbs, Mardy Fish and Chris Bowers.  Commentators for outer court matches will be provided by the BBC.  In addition to the video offerings, DirecTV viewers can access results, schedules, draws and other interactive features through the “Red Button” application on their remote. In total, ESPN will provide more than 350 hours of coverage through this unique application.

ESPN Classic is presenting a seven-day, non-stop marathon of memorable Wimbledon matches for exactly one week, ending after 168 hours (Monday, July 3 at 6 a.m. – one hour before ESPN’s live coverage begins) with 40 different matches including 33 finals..  The marathon will conclude with the 2016 Ladies’ and Gentlemen’s Championships.  Details.

ESPN International, the home of tennis’ Grand Slam events in Latin America and the Caribbean, will provide live Wimbledon coverage to more than 44 countries and 60 million homes via its television and digital platforms throughout the region.  ESPN’s Spanish language pan-regional networks will offer more than 100 hours of live tennis, focused on the top-ranked players in the world, while the regional networks will focus on players of local interest. In addition to the live coverage, ESPN will offer two daily encore presentations featuring the best matches of the day. ESPN’s Spanish-language commentator team will include tennis experts Luis Alfredo Alvarez and Eduardo Varela calling matches with analysts Javier Frana and Jose Luis Clerc, along with reporter Nicolas Pereira. In Brazil, ESPN will offer more than 150 hours of combined coverage between its ESPN and ESPN+ networks and will be available via simulcast on WatchESPN – ESPN’s Portuguese broadband service.  ESPN’s Caribbean networks will provide simulcast coverage and will broadcast over 110-hours of live Wimbledon content.

ESPN Play – ESPN International’s Spanish- and English-language broadband service in Latin America and the Caribbean – will offer 1,400-hours of live coverage from up to 15 courts simultaneously, covering every point from every camera court; ESPN Play will also offer qualifying matches for the first time, June 26-29, as well as the Wimbledon Surround three-screen service for the Gentlemen’s and Ladies’ Semifinals and Championships.

Tennis has been part of ESPN since its first week on the air, providing numerous memorable moments from around the world, but it has never been as important as today, with the unprecedented position of presenting three of the sports Major events from start to finish (Australian Open, Wimbledon, US Open, with exclusivity at the latter two).