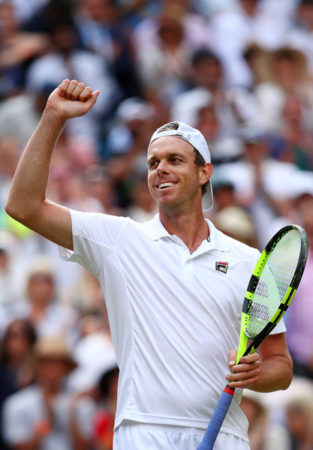 Last year at the All-England Club, Querrey eliminated the No. 1 seed Novak Djokovic in the third round and reached the quarterfinals.

“I am still in a little bit of shock myself,” Querrey said after the match.

“I didn’t start my best, but I just kept with it. Kept swinging away and then really found a groove in the fourth and fifth set.”

Querrey, ranked No. 28 is the lowest seed to reach a major semifinal since No. 34 Tommy Haas did it at Wimbledon in 2009.

Murray, who was clearly hampered with an injury, especially in the last two sets, came into the tournament recovering from a left hip injury which prevented him from playing any pre-Wimbledon events.

In another shocker of a result, Novak Djokovic retired from his quarterfinal match against Tomas Berdych, trailing 7-6(2), 2-0 with a right elbow injury.

Djokovic said to media that there was really no sense in continuing play as he was having pain hitting his serve and his forehand.

The 11th seeded Berdych, reaches his second Wimbledon semifinal where he’ll face seven-time Wimbledon champion Roger Federer. the third seeded Federer gained a bit of revenge against Milos Raonic, who beat Federer in the final four last year, winning 6-4, 6-2, 7-6(4).
Federer is in the semifinals of Wimbledon for a 12th time.