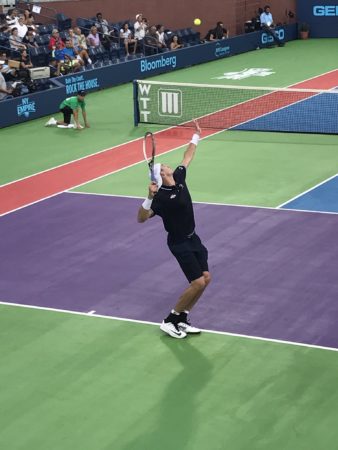 “Tonight was lot of fun, the crowd was great,” said  the 21st -ranked Isner after the match. “I’m just glad I was able to help the team win. I do know him (Young) well and we’re good friends. We’re going to laugh about it in the locker room after this but he is a great guy and a great player. He beat me earlier this year so I had a little revenge on my mind.”

“Everyone contributed in some way and it’s fun to start out with a win,” said New York Empire head coach Gigi Fernandez

Philadelphia jumped out to a 5-3 lead after the women’s doubles set but the Freedoms’ Sloane Stephens struggled to keep the momentum against the NY Empire’s Kirsten Flipkens in women’s singles. Flipkens won the set 5-1, creating what appeared to be a shift as the NY Empire took the overall match lead, 8-6.

Tied 11-11 after the mixed doubles and third set, the NY Empire’s men’s doubles team of Isner and Neal Skupski lost to the Freedoms’ Fabrice Martin and Young, 5-4, to enter the final set with a one-point deficit.

The New York Empire returns home to face the Freedoms again on Wednesday, July 19 after two straight matches on the road, one in Philadelphia and the other against the Washington Kastles.