You are here: Home / Approach Shots / Catching Up with Mardy Fish of the New York Empire 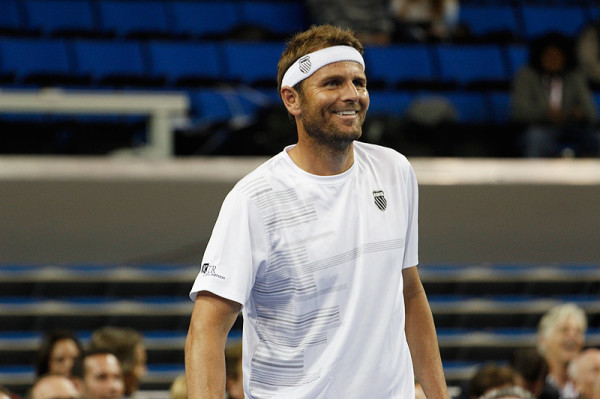 (July 19, 2017) BILLIE JEAN KING USTA NATIONAL TENNIS CENTER, Flushing Meadows, NY – Mardy Fish is again playing World TeamTennis this season. Fish who retired from the tour at the US Open in 2015, is playing at the US Open again, to be exact – on Court 17 at the National Tennis Center where the New York Empire play their home matches.

“I never played on this court when I played here,” said the former No. 7 player in the world. “What is weird is that …. I’ve never been around here without the tournament going on obviously and no “Louis” (Louis Armstrong Stadium).

“I played my first US Open match there and my last. My last match, period. So, I have a lot of memories on that court. And that steel structure, whatever it is. That was a bummer not to see that anymore.”

The US Open site is in the process of building a new Louis Armstrong stadium, but will have a temporary one for the upcoming tournament next month.

“It’s interesting though to see. We’re not too far out now from the (US) Open and it’s quite chaotic on the grounds right now, but very interesting to see it, without it being the tournament.”

Fish who played Davis cup during his career was asked about some of the proposed changes in the competition.

“I’m all for changes in Davis Cup.”

Asked about if he is in favor of a neutral site venue for the final, he said: “I’m not sure that I like that quite as much, because of the home side and the away side. There is something special about away ties as well. Being a part of just having the select few people on your team rooting for you, and that’s it.”

“It’s very special and I have some of my best memories from away ties. Obviously, the home ties speak for themselves, they’re incredible and all that but… I wouldn’t enjoy that (change) as much.”

Fish said that he thought that Davis Cup should be every two years. “You see the success of the Ryder Cup. I think you would get more players to play in the first round. The first or the second round this year, they did not have one Top 15 player playing and that’s a shame because it’s something special.”

“I’m sick of finishing second,” he said. “Same guy keeps beating me, it’s annoying. I don’t play all that much, so it’s fine.”

Comparing golf to tennis, the seven-time tennis tournament winner explained: “I think tennis is the hardest sport in the world, obviously I’m a little biased. Just overall, what these players have to go through, what we had to go through on a daily basis, a weekly basis, a yearly basis, I don’t think you can put anything else up to it.

“Golf is interesting, but for me golf personally was very helpful in my sort of comeback to normalcy, really. But everything that happened to me away from the court and so I used golf to still get my competitive juices going,” he explained.

“Competitive golf to me, is one of the most fun things I can do.

“Mentally it’s tough. Any sport you really got to be good at your craft, but the thing for me that is lacking is the physical side, and in tennis it’s so relevant, it’s so important to be fit.

“I can still hit the ball fine, but I just feel so slow and it just matter so much and it golf it doesn’t.”

On Wednesday night, the New York Empire lost to the Philadelphia Freedoms 25-13. In men’s singles, the 2004 Olympic silver singles medalist lost to Donald Young 5-3. Young is currently ranked No. 50 in the world. Fish also paired up with Neil Skupski in men’s doubles in a 5-4 loss to Young and Fabrice Martin.