You are here: Home / Features / Orange County Breakers Start Off Homestand With Win Over New York Empire In Emotional Night

(July 22, 2017) PALISADES TENNIS CLUB, Newport Beach, CA – The Orange County Breakers started off their three-game homestand this weekend with a 24-18 victory over the visiting New York Empire. Local star Steve Johnson was playing in the second of his four scheduled matches for the Breakers, competing in both men’s doubles and men’s singles tonight. After getting married last weekend, Yanina Wickmayer was competing in her first home match for the Orange County squad, playing in the first two events of the night.

It was an emotional night for many people, as earlier on Saturday at nearby Orange High, there was a celebration of life for former Breakers assistant coach Steve Johnson Sr., father of the Steve Johnson on the team. Among those in attendance were Michael Chang and Sam Querrey, as well as hundreds of other people whose lives Johnson Sr. touched on and off the tennis court. Johnson Sr. had passed away in his sleep this past May, and was well-known in the Southern California tennis community for his kind heart, passion for the sport, and knowledge of the game. To pay tribute to coach Johnson, the Breakers had a “SJ Sr.” logo on their jerseys in addition to having a moment of silence for him before the match. 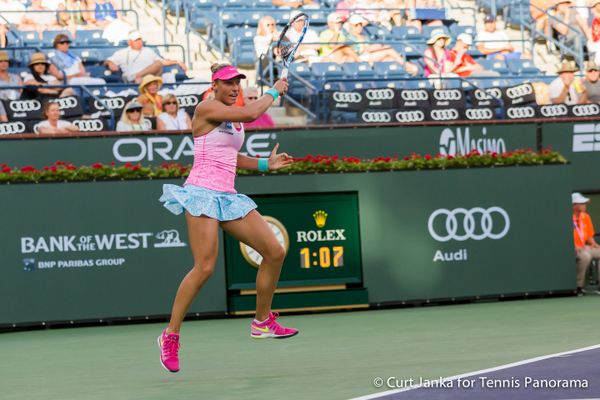 It was a battle of Belgians to start the night, as Yanina Wickmayer earned her first win of the season in singles, as she won both deciding points in the set en route to beating former Wimbledon semifinalist Kirsten Flipkens 5-0. Both ladies stayed on court for women’s doubles which was next, as Andreja Klepač joined Wickmayer and former USC star Maria Sanchez joined Flipkens on court. There were no breaks of serve through the first six games, before Sanchez had her serve broken. But the Empire duo broke right back to send the set into a tiebreak, and then Sanchez and Flipkens continued their momentum to shut out the Breakers with a 5-0 win in the tiebreak, slightly trimming the overall lead the Breakers held.

The next set featured a showdown between the Skupski brothers, as the former LSU stars were on the opposite side of the court once again after also battling a couple nights ago in New York. Ken teamed up with Johnson while Neal was playing with folk hero Marcus Willis. The match headed to a second straight tiebreak as neither team was able to break serve, although the Empire team did have two break point opportunities to break Ken’s serve at 3-3 in the set but the Breakers duo were able to win the deciding point. Heading into the set 0-2 this season against his brother Neal, Ken Skupski and Johnson won the tiebreak 5-2 over Neal and Willis to give the Breakers a 14-9 lead at halftime over the Empire.

Following halftime, mixed doubles commenced as it once again pitted the Skupskis against each other. There was only one break of serve in the set, as Klepač and Ken converted the lone break point opportunity they created to defeat Neal and Flipkens 5-3, extending the lead for the Breakers heading into the final set of the evening.

Marcus Willis, notorious for advancing through pre-qualifying and qualifying of Wimbledon in 2016 before facing Roger Federer in the second round of the main draw, competed against Johnson in men’s singles, giving the American a great battle. There were no breaks of serve in the set, however Johnson did have to dig himself out of a 0-3 hole in one service game, winning four straight points to stay on serve. In the tiebreak, Willis continued his strong play and took the breaker 5-3, forcing the match to move into extended play. With a 23-17 lead though, all Johnson needed to do was win a single game to clinch the win for Breakers, and he did just that in the second game of extended play with a service hold to help the Breakers win 24-18, as the squad exacted revenge on the Empire who had just beaten them a couple nights ago.

Up next for the Orange County Breakers (2-3):

Home match vs the Springfield Lasers on Sunday, July 23rd

Up next for the Springfield Lasers (2-4):

Away match vs the San Diego Aviators on Sunday, July 23rd 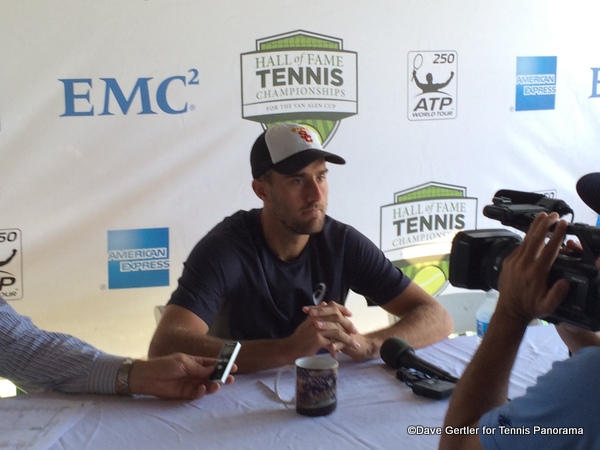 A: When you get on a tennis court, you’re always reminded of it. You make it through with love and support from friends and family.

Q: What were some of the thoughts going through your mind when you were playing tonight?

A: Nothing really tennis related. I’m a bit fried emotionally and mentally. Just trying to get through it and I was trying to hang on for the team and get a win.

Q: It was a nice tribute night for your father

A: Yeah of course. This is home for him. Southern California tennis.

Q: Do you think it’s kind of therapeutic in some way for you to come out here and play?

Q: You really clinched it with those three aces in the last game.

Q: Newport Beach mayor was in the house. What do you think about that?

A: Yeah it’s great. I’m a Orange resident so I haven’t got down here too much recently. But I did play here a lot as a kid. So this is kind of a home club for me so it’s fun to come back, play for Rick. Nice to play for Eric who owns the team, we used to play a lot of tennis him and I back here in the day. So it’s fun to get back to your roots.

Parsa: Coming off Wimbledon, now it’s the electrifying World Team Tennis for you. How do you feel being in this fun atmosphere?

Marcus: Yeah it’s great. It’s lovely to be back playing for the New York Empire again and playing in these conditions, and trying to win for my team. It’s good fun. I play well in World Team Tennis normally.

Parsa: You were playing Wimbledon with Jay (Clarke) who is a young guy. How did it feel being the older veteran *Marcus laughs*, being sort of a mentor?

Parsa: After Wimbledon last year, you didn’t play till Vienna. You had a few months off from tournaments which means you now have a good chunk of events for you to gain a lot of points in. You don’t have anything to defend other than a futures title at the end of last year. What’s your schedule heading into the hard court season and what are your goals?

Marcus: Yeah, my schedule is pretty busy. Right after here, I’m going to play either Toronto or Aptos. And then I’m playing pretty much through till the 18th of December as much as I can whilst looking after my body. Obviously last year after Wimbledon I had a problem in my stomach which was tough, and then earlier this year I had a baby. I haven’t been playing all that much which is good, so I can rack up some good points if I keep playing well and see where I can get to.

On-court interview between Parsa Nemati and Ken and Neal Skupski:

Parsa: How did it feel competing against each other tonight in two sets?

Ken: Yeah we played the other day. Neal got the best of me. When you’re coming home, you’ve got to try and get the win. So it’s 2 all or 1 all in terms of matches. We get to play against each other again next Wednesday.

Parsa: You guys advanced to the Wimbledon quarterfinals, farthest you guys have advanced at a major in men’s doubles. How does it feel, that’s a big accomplishment and to do it together?

Neal: Yeah for sure. It’s always special to make the quarterfinals of a grand slam, but especially at Wimbledon. We both grew up watching it when we were younger. You only dream of playing at Wimbledon and to make the quarterfinals is a great experience. Not just for Ken and I, but the whole family. They were down watching us, especially our family as well, family and friends, some from America. They came over. It was nice to play in front of them. And hopefully we’ll be back next year and maybe even go a bit further.

Parsa: Although you guys didn’t play at the same time, you both really excelled at LSU. How do you guys think the average age of the players in the top-100 being higher today, especially on the men’s side in singles, does that make college even a better option for some players? What do you guys say to people who may be on the edge of whether to play in college or turn pro?

Ken: Yeah, I think a large portion of junior players should think about it. I mean Steve Johnson, he was one of the best college players of all-time. He went to college, he didn’t look to go to the pros too soon. I think it did him the world of good. It did us the world of good. John Isner, Bryan Brothers. You can name so many guys who… Kevin Anderson…You can name so many players who’ve matured physically, mentally, enjoyed life. Enjoyed the experience of college and taken it to the next level at the pros. It’s an opportunity that people should really look at because the format is great. Similar to this. You’re playing for a team and you get to experience so many different things playing in college tennis that you don’t get out on the tour. And I wish more people would do it.

Parsa: You’re heading into the hard court season now, what are your goals for your next few tournaments and then the US Open?

Neal: Yeah after World Team Tennis, I’ll probably play in a couple of challengers, Aptos and Vancouver. Hopefully get our rank up a little bit to make the main draw of the US Open. Go back home after the US Open. The indoor season will be starting. That’s when we normally do our best, we normally finish strong in the season.  Hopefully we’ll do the same and then make a good run to try and make Australia to start the year.