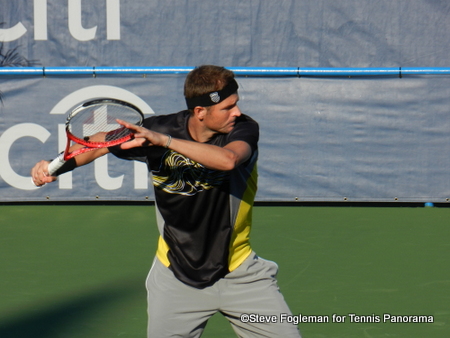 Playing in his first career final on the North American tennis circuit for champion tennis players over the age of 30, Fish broke Roddick at 5-5 on the grass courts at the Newport Casino with some rocket returns and a crafty backhand slice that neutralized the forehand of the 2003 U.S. Open Champion. Fish went on to hold serve at 6-5 enabling him to hoist his first trophy of his PowerShares Series career.

“It was a blast,” said Fish of his first PowerShares Series title. “What a special weekend it has been for all the Hall of Fame inductees, especially my buddy.”

To advance into the final earlier in the day, Fish beat Jim Courier 6-3 in the first semifinal, while Roddick defeated James Blake 6-2 in the second semifinal.

Each PowerShares Series event features two one-set semifinal matches and a one-set championship match and, for the third year, players make their own line calls with assistance of electronic line-calling.

The remaining PowerShares Series for this season schedule with player fields are listed below and ticket, schedule and player information can be found at www.PowerSharesSeries.com;

In 2015, Andy Roddick won the PowerShares Series points title in his second year of competing on the series with 1,600 points. Roddick won a record eight events Los Angeles, Lincoln, Chicago, Austin, Little Rock, Dallas, Richmond and Minneapolis. Blake finished second in the points rankings with 1,200 points, winning events in Boston and Cincinnati. Mark Philippoussis finished in third with 1,100 points, winning titles in Salt Lake City and Vancouver. The year before in 2014, McEnroe won the points title for the first time in the nine-year history of Champions Series tennis by winning events in Kansas City, Indianapolis, Nashville and Charlotte.