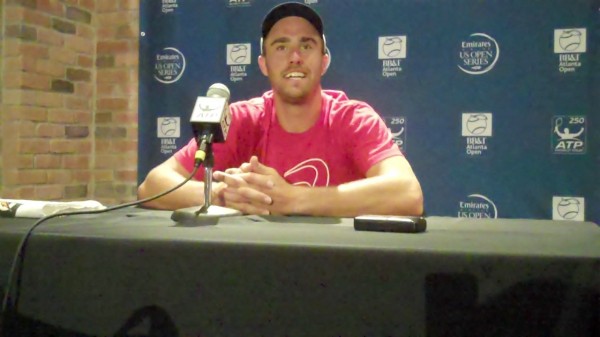 (July 23, 2017) PALISADES TENNIS CLUB, Newport Beach, CA – The Orange County Breakers continued their homestand with a second straight victory, winning each of the five sets played tonight for an assertive 25-10 victory over the Springfield Lasers on Military Night. The previous night had been a tribute to the father of Breakers star Steve Johnson, Steve Johnson Sr., and the Breakers earned another win on Sunday night for their former assistant coach.

Yanina Wickmayer got off to another quick start for the Breakers, winning the first three games of the night against Newport Beach resident Julia Boserup, as the recently married Belgian had now won eight straight games in women’s singles sets up to that point. Wickmayer closed out the set with a 5-2 win to help build a nice lead for the Breakers once again after she had earned a 5-0 win the previous night to also start the night.

The momentum for the Breakers continued as Andreja Klepač and Wickmayer raced out to a 4-0 lead, before finishing off the set of women’s doubles with a 5-1 win over Boserup and Anna-Lena Groenefeld. Through two sets, the ladies of the Breakers helped the team cruise out to a 10-3 lead, putting the Lasers in an early hole.

Steve Johnson and Ken Skupski improved to 3-0 this season as a doubles team, dispatching Jean-Julien Rojer and Benjamin Becker 5-4(4) after the Lasers duo served for the tiebreak at both 4-3 and 4-4. Skupski then stayed on court as he and Klepač converted two of the three break opportunities they created to defeat Groenefeld/Rojer 5-1 in a quick set of mixed doubles.

Heading into the final set of the evening, the Breakers held a commanding 20-8 lead. Former NCAA champions Steve Johnson (USC) and Benjamin Becker (Baylor) faced off for the second time in less than a week, as Johnson once again came out with a 5-2 win over the German to close out the evening.

The Breakers improved to 3-3, while the Lasers fell to 2-5 on the season, and remain in last place of the six teams in the league. The Breakers however moved from fifth place to now being tied at third place with the Washington Kastles. With marquee players Maria Sharapova and Steve Johnson playing their final match Monday night for the squad, the Breakers will look to capitalize on their presence and finish their three-match homestand with a win over the defending champions, the San Diego Aviators. The Aviators just lost Ryan Harrison who will be competing in Atlanta this week and Washington the following week, however Rajeev Ram will make his Aviators debut after winning the doubles title this past week at the Dell Technologies Hall of Fame Open in Newport, Rhode Island. The match between the Southern California rivals is already sold out, as Orange County fans are eager to see Sharapova make her home debut and the local star Johnson to play his final match of the season for the team.

Up next for the Orange County Breakers (3-3):

Up next for the Springfield Lasers (2-5):

Away match vs the Washington Kastles on Tuesday, July 24th

Parsa: How does it feel being a Newport Beach resident, but playing against the Breakers?

Julia: Yeah it’s definitely a weird feeling playing against my home-town but that’s how it goes in World Team Tennis. I’m playing for the Springfield Lasers. But it was fun to play here, all my friends and family came out to watch so that’s fun.

Julia: Yeah definitely just trying to play my best tennis out there and improve every day and really enjoy it, enjoy the summer hard-court season. It’s always nice to be in the states after being in Europe for a few months so I’m going to really enjoy playing on home soil for the next few weeks.

Parsa: First World Team Tennis season for you. How does it feel, it’s a different atmosphere, very fun and team-oriented. You didn’t get to play in college and get this kind of atmosphere so what are your thoughts so far?

Julia: Yeah tennis is an individual sport so to get the opportunity to play on a team is great. It’s been really fun the last couple days, some different pressures when you’re playing for a team. With the scoring format, it goes really quickly so you definitely feel the time crunch, but I’ve really enjoyed my time out here.