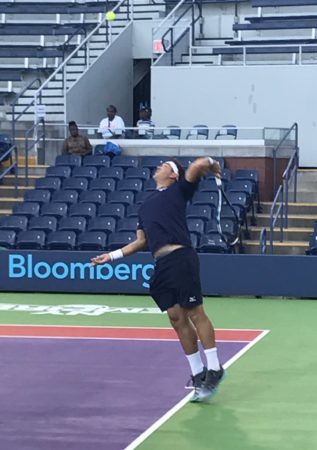 Commenting on being the “closer” for a second straight night, Willis said “I started out a bit nervy, in the end I found my game. One I do is to fight very hard – it worked.”

What changed the match around for last year’s Wimbledon qualifier: “I was focusing a lot, I was adjusting my serve a lot, noted the southpaw. “It’s very different conditions than last night, it’s slower today.”

“I just stayed focused and believed that I could win.”

Willis was 2-3 down in the set but the crowd got behind him and motivated him. “It was quite a dynamic atmosphere. It felt like a home match.”

Willis was not intimidated at all playing on the grounds of grounds of the US Open. “Wimbledon was pretty daunting. I seem to play well in big stadiums, so far, so good.”

The No. 528th ranked player in the world says that his life has changed a lot since last year when he made it through the 2016 Wimbledon qualies to reach the second round of the main draw. “I’m looking forward to getting back on court more this year. Just had a baby so took some time out. I have to get back in shape and get on tour right now. I’m looking forward to that. Coming back stronger next year I hope. Play for the Empire again.”

Willis plans to play tournaments in Portugal, in August, then Turkey for two challengers and then the US for six weeks, then Thailand at the end of the year or Japan – depending on his ranking. He hopes to get in the top 300, top 350 by the end of the year.

The Empire win keeps the team’s hopes alive for a playoff spot with one regular season match remaining.