(August 2, 2017) OMNI LA COSTA RESORT & SPA, Carlsbad, CA – The San Diego Aviators clinched a spot in Saturday’s World Team Tennis final against the Orange County Breakers before Wednesday’s match against the Washington Kastles even started. The Breakers kicked off their match one hour earlier than San Diego, and by virtue of the Breakers winning at least eight games against the Philadelphia Freedoms, the Aviators clinched a spot in the final. The legendary Rod Laver was in attendance for the second straight night to watch the defending champions in action.

Rajeev Ram earned a 5-2 win in men’s singles for the second straight night, as Aviators coach John Lloyd’s decision for Ram to start off the evening has certainly paid off the last two nights. Ram’s opponent tonight was Australian Sam Groth, and ironically both men have the same coach, Billy Heiser of Add 2 Performance. The Aviators were able to extend their lead even further in the next set, as Darija Jurak and Naomi Broady raced out a 4-1 lead over Madison Brengle and Anastasia Rodionova. The Kastles duo were able to get one of the breaks back though however, and were about to send the set to a tiebreak, but the Aviators won the 3 all deciding point on Jurak’s serve to close it out and win 5-3.

Ram and his partner Raven Klaasen served lights out in doubles, winning 16 of their 17 service points to beat the tandem of Groth and Rob Lindstedt 5-2. Both doubles teams actually play together on tour right now, something not very common in World Team Tennis where players are usually matched up with various partners. Since Groth skipped the Citi Open in Washington D.C., Lindstedt played doubles over there with world number seven Dominic Thiem and they lost in the first round on Monday. However, this opened up an opportunity for the league to snatch up a great substitute that was available and ready to fly out to California for two World Team Tennis matches and Lindstedt was happily reunited with his doubles partner Groth.

The Kastles started their comeback after halftime with a 5-3 win women’s singles from Brengle over Broady. It was the most entertaining set of the night with a great contrast of play between the two ladies. There was especially a difference in tactics in regards to serving, as Brengle hit 90% of her first serves in as opposed to Broady’s 48%. Brengle’s serve is not her weapon, therefore she looks to get the point started so she may utilize her groundstrokes, which she can hit all day if need be. Broady on the other hand stands at 6’2 and goes for a lot more on her serves which also means as a result of her going for much more, she makes a lot less of first serves in.

With Brengle’s win, the Aviators had their lead trimmed but they still led 18-12 heading into the final set of the evening. The Aviators fell in mixed doubles once again, as Rodionova and Lindstedt won 5-3 over Jurak and Klaasen to force the match into Extended Play. The Aviators were familiar with this situation and once again all they needed was a single game to end the match. Klaasen served to start and with his hold a few minutes later, that was all the Aviators needed to clinch a 22-17 victory over the Kastles to wrap up the regular season.

As the higher seed, Orange County will have the advantage of selecting the order of play in a battle of the two Southern California teams. The match will begin at 8:00 on Saturday night, and will be streamed live on ESPN3 for the duration of the whole match, and at 9:00 the match will also begin airing on ESPN2. 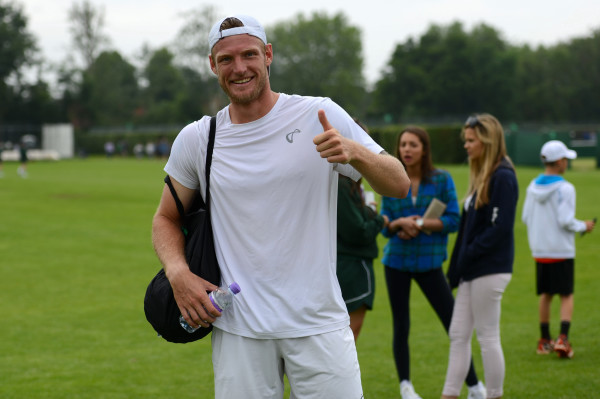 Parsa Nemati: How have the team of Billy Heiser and Add 2 Performance helped you succeed on and off the court?

Sam Groth: Yeah I mean it’s a good start. We started in Monte Carlo, I had a bunch of stuff I needed to work on and I thought during the grass court season it really started to come together. And I spent a week with him down in Tampa and I’m excited for the hardcourt season.

Parsa Nemati: What are your goals looking ahead to the US Open? You’re playing a lot of doubles, how do you balance that out with the singles?

Sam Groth: Yeah I mean for me singles is still a priority. I do well in doubles when I play but I’m trying to play as much singles as I possibly can, that’s for sure. I want to be back inside the top-100, that’s the first goal. It’s going to take some work but I haven’t got a lot of points to defend and I feel like I can get back there.

Parsa Namati: You got engaged a couple months ago. Do you feel that there was any weight lifted off you after you popped the big question?

Sam Groth: Haha naw, we have a great relationship anyways. That’s definitely a positive, with the good times and bad on the tennis court, that’s always a positive in my life so definitely not a weight haha. It’s exciting times.

Parsa Nemati : Since 2007, you’ve been ranked in the top-50 and you have won at least one doubles title each year. How have you been able to maintain your consistency on tour?

Rob Lindstedt: You know, it’s like *laughs* losing weight. There’s no secret, you’ve got to work hard and eat right. So I don’t know, I realized at least that at some point in my career I have to work hard to do it and I always thought that I want to play for a long time. I don’t work for a short-time period, I work for the longer spectrum. I mean it works. And then you’ve got to be a bit lucky, have good partners as well.

Parsa Nemati: You had success both at Fresno State and Pepperdine. Reached the NCAA finals in doubles and played the Bryan Brothers and it just shows how much college tennis has made an impact. You see players on tour in singles today such as Isner, Johnson, and Anderson. How much of a tool do you think college tennis is for the tour?

Rob Lindstedt: It’s a very good tool. Every player develops differently. I was a slow developer. I catch on slowly probably because I’m not too bright. So for guys that really are not that competitive at an early stage, it’s a perfect way because not so much maybe to learn how to get coached or whatever but you a play a lot of matches so you learn to play break points, holding serve, serving for sets. And that is what makes a great player so the more you do that, that’s great because you can’t practice that.

Parsa Nemati: Trick question, who scrambles your eggs the best?

Parsa Nemati: What kind of experience has it been, joining the San Diego Aviators? You’re among the likes of Rajeev Ram, Naomi Broady, Raven Klaasen, and Darija Jurak, you’re with all these pros!

Emmanuel Mensah: Well it’s been a very good experience for me. I knew a couple of these guys. Being next to them and sitting with them as part of a great team, the San Diego Aviators, I feel blessed. I feel blessed to be here.

Parsa Nemati: You play a lot of the men’s open tournaments and have had great success. Although you are not a pro, what motivates you to keep going and keep training?