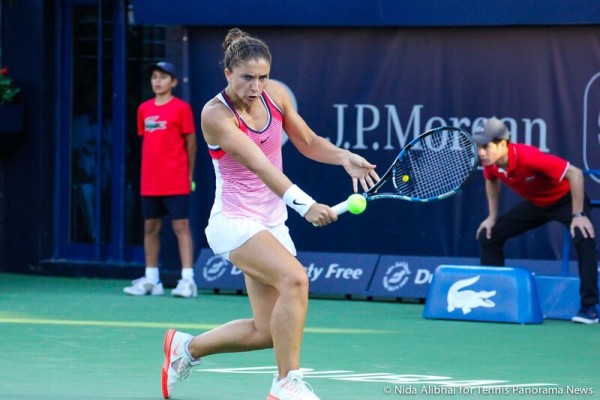 (August 7, 2017) Sara Errani, 2012 French Open finalist has been banned for two months by the International Tennis Federation due to doping. The 29-year-old Italian tested positive for the banned substance letrozole in a test taken in February.

Errani said that her food had been contaminated from her mother’s cancer medication.

A panel ruled that Errani’s fault was “at the lower end of the scale” but she would still be banned. Her results from February 16-June 7 have been retroactively taken away.

Here is the ITF release:

Decision in the case of Sara Errani

An Independent Tribunal appointed under Article 8.1 of the 2017 Tennis Anti-Doping Programme (the “Programme”) has found that Sara Errani committed an Anti-Doping Rule Violation under Article 2.1 of the Programme and, as a consequence, has disqualified the affected results and imposed a period of ineligibility of two months, commencing on 3 August 2017.

Ms. Errani, a 29-year-old player from Italy, provided a urine sample on 16 February 2017 as part of an Out-of-Competition test under the Programme. That sample was sent to the WADA-accredited laboratory in Montreal, Canada for analysis, and was found to contain letrozole, which is an aromatase inhibitor that is included under section S4 (Hormone and Metabolic Modulators) of the 2017 WADA Prohibited List, and therefore is also prohibited under the Programme.

On 18 April 2017, Ms. Errani was charged with an Anti-Doping Rule Violation under Article 2.1 of the Programme (presence of a Prohibited Substance in a Player’s Sample). She promptly admitted that she had committed the Anti-Doping Rule Violation charged, and asked for a hearing before an Independent Tribunal in accordance with Article 8 of the Programme to determine the consequences to be imposed on her for that violation.

At a hearing on 19 July 2017, the Independent Tribunal received evidence and heard legal arguments from both parties, and subsequently issued a reasoned decision on 3 August, which is available at www.itftennis.com/antidoping. The Independent Tribunal determined that (1) Ms. Errani should serve a period of ineligibility of two months, beginning on 3 August and so ending at midnight on 2 October 2017; and (2) her results between 16 February 2017 (the date of sample collection) and 7 June 2017 (and the date of her next test, which was negative) should be disqualified, with resulting forfeiture of the ranking points and prize money that she won at events during that period.

The Tennis Anti-Doping Programme applies to all players competing at Grand Slam tournaments and events sanctioned by the ITF, ATP, and WTA. Players are tested for substances prohibited by the World Anti-Doping Agency and, upon a finding that an Anti-Doping Rule Violation has been committed, sanctions are imposed under the Programme in compliance with the requirements of the World Anti-Doping Code. More information on the Programme, sanctions, statistics, and related matters can be found at www.itftennis.com/antidoping.