You are here: Home / Books / Paul Annacone, Former Coach of Pete Sampras and Roger Federer, Has a New Book – “Coaching For Life” 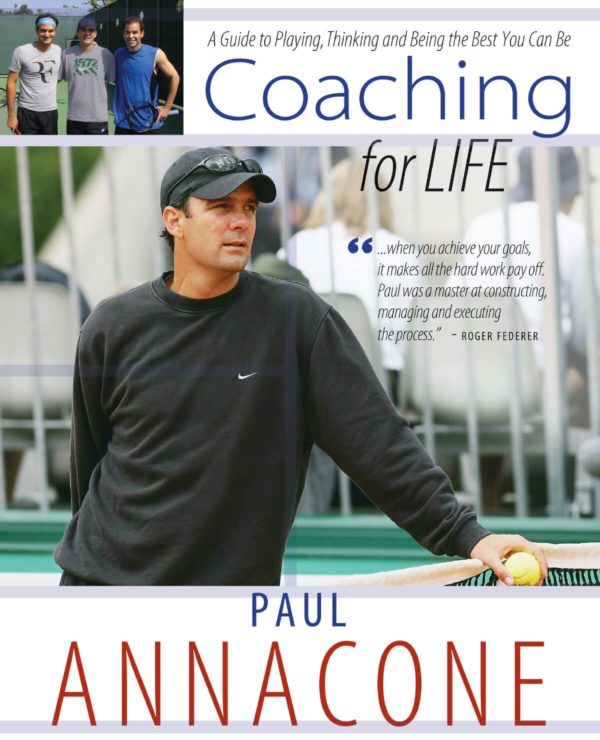 PAUL ANNACONE SHARES PATHWAY TO SUCCESS, INCLUDING INSIGHTS FROM CAREER WORKING WITH FEDERER, SAMPRAS, IN NEW BOOK COACHING FOR LIFE

NEW YORK (AUG. 7, 2017) – After his own career as a tennis professional, Paul Annacone, author of the new book Coaching for Life, became coach for such greats as Pete Sampras, Roger Federer, Tim Henman and others. His eye-opening, autobiographical book explains how each one of us can attain a level of excellence. He uses tennis as a metaphor, as well as a guide, to teach how we can strive toward a goal and overcome the obstacles.

Annacone comments, “I am often asked, What makes the great so great? What can we learn from their level of excellence?  I answer these and many more questions in Coaching for Life. The anecdotes are taken directly from the tennis court, and they are presented in a step-by-step way that can help anyone in any walk of life, regardless of the challenges. You can achieve success, the book points out, but you have to follow certain procedures. As I say in the book, the will to win is nothing without the will to prepare.”

The secrets to success Annacone weaves through Coaching for Life are not about tennis, but rather about the process-oriented journey he has experienced firsthand with some of the most successful players in the game’s storied history. Annacone explains the ability of masters like Federer and Sampras to keep perspective and clarity of purpose in spite of the worst kinds of adversity on the court.

Coaching for Life reveals Annacone’s gentle, yet forceful, paradigm for focus, intelligent planning, and following one’s own skill-set to success that rings true in this uncertain age of frenetic activity.

Annacone played professionally for 11 years, reaching a career high ranking of No. 12 while winning three singles and 14 doubles titles. He then turned to coaching, spending over seven years with Sampras, three seasons with Federer, five years with Tim Henman and a season with Sloane Stephens. Both Federer and Sampras won Grand Slam titles and were ranked No. 1 in the world while working with Annacone. His coaching tenure also included time in the USTA High Performance Program and as Head Coach of Britain’s Lawn Tennis Association. Annacone has been a commentator and analyst with Tennis Channel since 2014.

Coaching for Life is being published by IRIE Books and is on sale now online at www.iriebooks.com, www.paulannacone.com, www.amazon.com, www.bn.com and www.booksamillion.com. In addition, the book will be available during appearances and book signing events with Annacone during the upcoming Western & Southern Open in Cincinnati and the US Open in New York. Information about these appearances can be found at www.paulannacone.com.