You are here: Home / Contributors / Meet the Press – WTA All-Access at Rogers Cup in Toronto 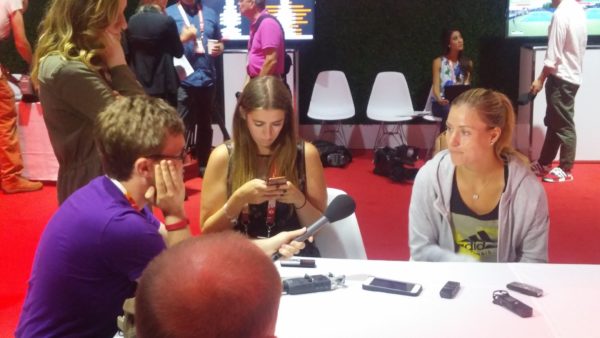 Meet the Press – WTA All-Access at Rogers Cup in Toronto

(August 7, 2017) TORONTO, CANADA – WTA All Access Hours are great opportunities for the media to talk to the top eight seeds of a tournament in a relaxed, open atmosphere. Toronto is typically the first tournament for top players after Wimbledon, and players were excited to talk about their break after Wimbledon as well as their hopes for the long hard court season ahead.

“It’s exciting. Playing on hard courts feels better,” said Elina Svitolina on Monday. “I had two weeks off and then slowly I was preparing for the hard courts. I’m feeling good and fresh.” The Ukranian also had a laugh about the added attention that has come with having a great season. “Everyone is listening to you more. It’s pressure, but it’s a part of being on top and a part of tennis. I think it’s quite normal.”

Johanna Konta was also able to laugh about the extra pressure that has come with her recent success. “Well luckily we have someone called Andy Murray. I think I’ve got it easy compared to him. I approach the sport in a way where all I’m trying to do is be the best that I can be and give my best out there. That’s all I can do. Try to leave the sport in a better place than I found it.”

The beginning of the hard court season is always a popular topic as Canada represents the true kick off of the US Open Series. “The courts fit me, the atmosphere, the crowd is always with me,” said crowd favorite Simona Halep. “I have a few tournaments where I feel like home, and this is one of them.” Despite being forced to retire last week in Washington due to the extreme heat, the Romanian is feeling in good health. “I’ve recovered. It was just because of the heat, so I had three days off without staying in the heat. I’m ready to start the tournament.” 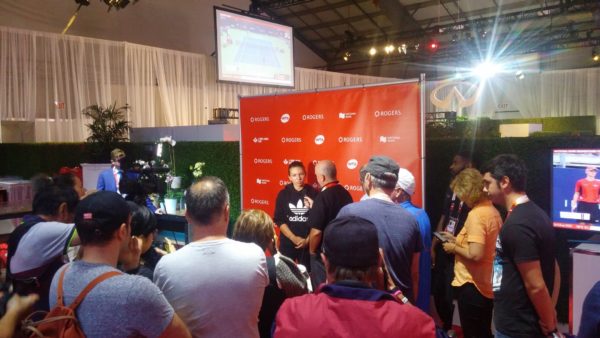 Garbine Muguruza was her normal, pensive self reflecting on her big win at Wimbledon and how she has matured over the last couple of years. “I look forward to doing the same thing here. I feel like I’m working good, and it helps me to face those uncertainties.” Despite taking home her second grand slam title, her celebrations were nothing over the top at home. “I think it took me two days to rest and to realize it. I didn’t have a big celebration, with my family, a nice dinner. I’m not that wild of a person.” She’s still working on a special place to store her trophies, of which there are sure to be more to come. “Not yet, I still have to make a place for all the trophies,” she smiled. “But it’s coming.”

2010 Rogers Cup champion Caroline Wozniacki also spoke to gaining experience and learning about the limitations of her body as she’s grown older. “My whole career I’ve been pretty much injury free, which has been great. But at the same time, for two years there was basically always something hurting. I had a bigger injury and I needed to take some time to just recover. In those months that I was out I was able to work on my whole body. I think it was important for me to take that extra time to make sure that when I came back that I was ready for it. I think that comes from experience, that you don’t rush back.”

Wozniacki will get under way Tuesday night, with most top seeds playing Wednesday, including defending champion Simona Halep on Wednesday night.