You are here: Home / Contributors / A Long, Tough Day at the Stadium

Peter, Eileen and Holly Barnes-Wallis are part of a group called the Netheads â€“ these tennis fans cheer on the United States Davis Cup team. They will be blogging about their experiences during the USA-Chile Davis Cup tie this weekend in Santiago. 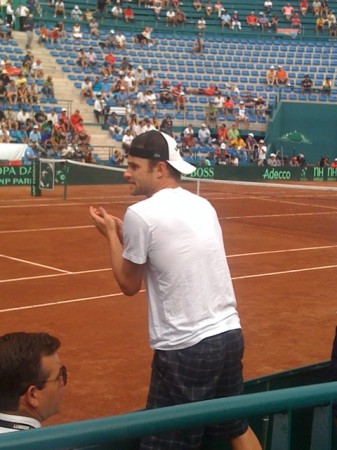 SANTIAGO – The first day of the Davis Cup tie between the USA and Chile has just finished â€“Â  even.Â  It marked the debut for Jim Courier as team captain and the return of Andy Roddick to Davis Cup tennis.

A 5,000-6,000 capacity arena had been built within the much larger confines of the national stadium in Chile.Â  For most of the day it was about half full, though the crowd thinned out towards the end of the day, but the atmosphere remained electricâ€“ it turned out to be a longer day than many anticipated and was played in scorching heat accompanied by the noise of the parrots in the nearby trees.

Andy Roddick was on first, playing Nicolas Massu.Â  The first set went to the USA, 6-2, with Roddick making two breaks of serve, but an early service break in the second set allowed Massu to draw level.Â  In the third set, at 3-2, we could hear Roddick driving himself forward â€œcâ€™mon, câ€™mon, right nowâ€ Â Â It worked and he moved up to 4-2 and went on to take the set. Another break proved enough in the fourth and Andy went on to win 6-2, 4-6, 6-3, 6-4. 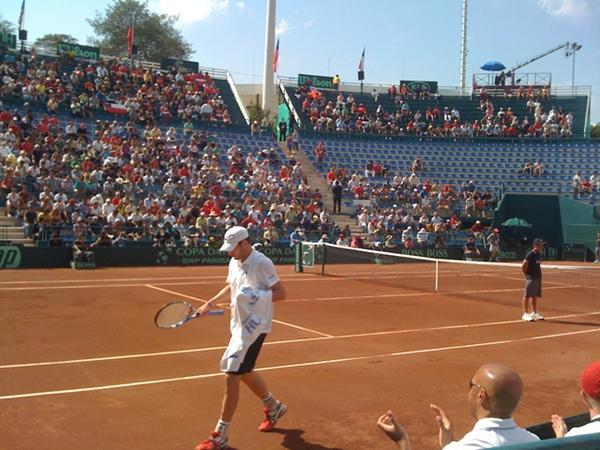 Second on court was John Isner, facing Paul Capdeville.Â  The first two sets both went to Isner on tie breaks andÂ  we Netheads were beginning to think this might be a short day, but as is often the case in Davis Cup ties we were mistaken.Â  Capdeville fought back in a gruelling contest and took the third and fourth sets, also on tie breaks.Â  There wasnâ€™t actually a break of serve until the 61st game of the match.Â  Match to Capdeville as he closed out the final set 6-4.

So, after eight and a half hoursâ€™ tennis we’re at one all.