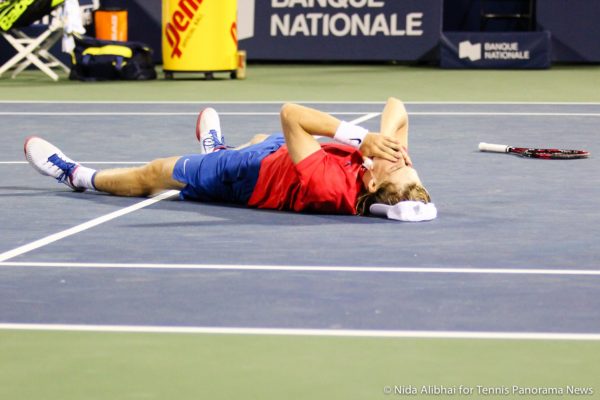 Shapovalov, who is 18, is the youngest player since Nadal back in 2004 to reach the round of 16 at a Masters Series tournament.

Shapovalov battled back from 3-0 down in the third set tiebreak.

“I think I stayed pretty calm,” said Shapovalov. “I played really well in the big moments. I didn’t get as tight as yesterday. I’m not sure why. I just played really free in the tiebreaker.

“But yeah, I mean, it’s difficult to say how I was feeling during the match. It was extremely hard physically and mentally. Rafa is such a warrior. Such a tough match.

“I’m just so happy to come out with the win.”

The loss means that Nadal can’t reach No. 1 this week. Had he reached the semifinals, he would have surpassed Andy Murray and moved into the top spot. He will have another chance in Cincinnati.

”It’s a very fast pace but to be honest i’m very thankfull to be in this position” #CoupeRogers pic.twitter.com/A2s8NHgJTc

The Canadian youngster, who came into the tournament ranked 143, beat 2009 US Open champion Juan Martin Del Potro on Wednesday night. He is the youngest quarterfinalist at Rogers Cup since Bjorn Borg who was 18 in 1974.

“It was a tough match,” said the Canadian. “A tough match the whole way. Yeah, I just tried to stay calm, tried to play every point, go for my shots. At the end of the day I really tried to keep playing my game and stick to my tactics. Yeah, I think I did that really well.”

“Honestly, I don’t think I could be in this position without them.”

“Yeah, it just felt really surreal, you know. I mean, I couldn’t believe it actually happened. Yeah, it’s tough to explain the emotions that were going through my head at that moment. But it was just pure happiness.”

In the quarterfinals, Shapovalov will face Adrian Mannarino of France.

“He played well. He has great potential. I wish him the best. He played with the right determination.” @RafaelNadal on opponent @denis_shapo pic.twitter.com/M4iAjKfYlk

“The draw was favorable, this is a bad loss, I have to accept it and keep working,” said Nadal.

“Probably my worst loss of the year because I lost against a player with a lower ranking. At the same time because of the opportunity I had here to come back to the No. 1. Always tough, but the draw was not that impossible after all the matches that were happening. So was an important mistake for me. That’s the real thing, no?”

“Is a bad loss. Just accept that and keep working.”

Nadal did praise his opponent:”He played well. He has a great potential. I wish him the best. He has everything to become a great player. He played with the right determination in the important moments.

“I don’t know if we can compare. Let’s see. Let him make his career. Don’t compare him with anothers. Probably will not be good for him.

“Is probably the worst match of the year for me,” Nadal said near the end of his news conference. “But that’s like this. I have another week in Cincinnati, and then I have a Grand Slam coming.

“I am not happy now. Tomorrow probably I don’t going to practice, but I have time to recover mentally. After tomorrow I going to be practicing in Cincinnati, and that’s it.” 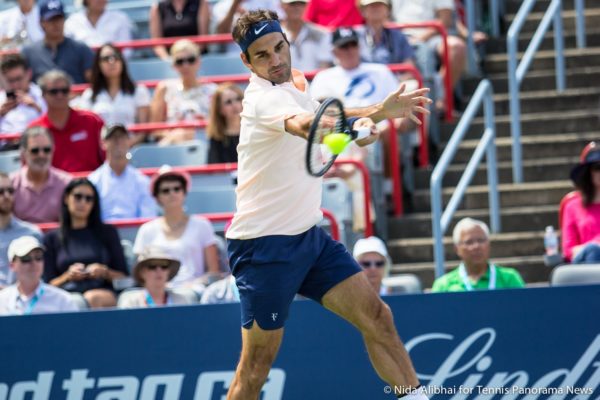 No. 2 seed Roger Federer did not play his “A” game but did rebound to stop Spaniard David Ferrer 4-6, 6-4, 6-2 to reach the quarterfinals of the Rogers Cup in Montreal on Thursday. Ferrer stopped the 19-time major champion’s consecutive set win-streak at 32.

“For me it was more of a struggle.,” Federer said of the mmatch. “As you know, you don’t always feel the same, and each opponent is a different problem.

“He started very well, especially on the return on my second serve. I was not able to serve my first serve where I wanted to, and he hurt me on the second serve.

“From the baseline, I didn’t have enough rhythm. The court is fast here. Of course, because of the surface, that it’s fast, you can’t just decide to put the ball in because physically David is very strong. You can’t do that. You have to go into the battle. You have to accept you’re going to make mistakes. But you have to keep moving forward.

Federer said that he did not get his rhythm until the end of the first set. “He was up 5-2. I fought back to 5-4. I had a game point for 5-All. That was good for me. I was able to break him in the beginning of the second set. That was a good period in the match for me.

“But later I was frustrated because I had the break, and he was able to fight back. That became dangerous for me. So I was happy that he was not able to keep up his level.

“He played a poor game, and this gave me the break, which cost him the match. So I think in the end, he helped me a little bit.”

Federer will face another Spaniard in the quarterfinals, Roberto Bautista Agut who defeated Frenchman Gael Monfils 4-6, 7-6 (5), 7-6 (2). The 12th seed saved a match point to get the win. 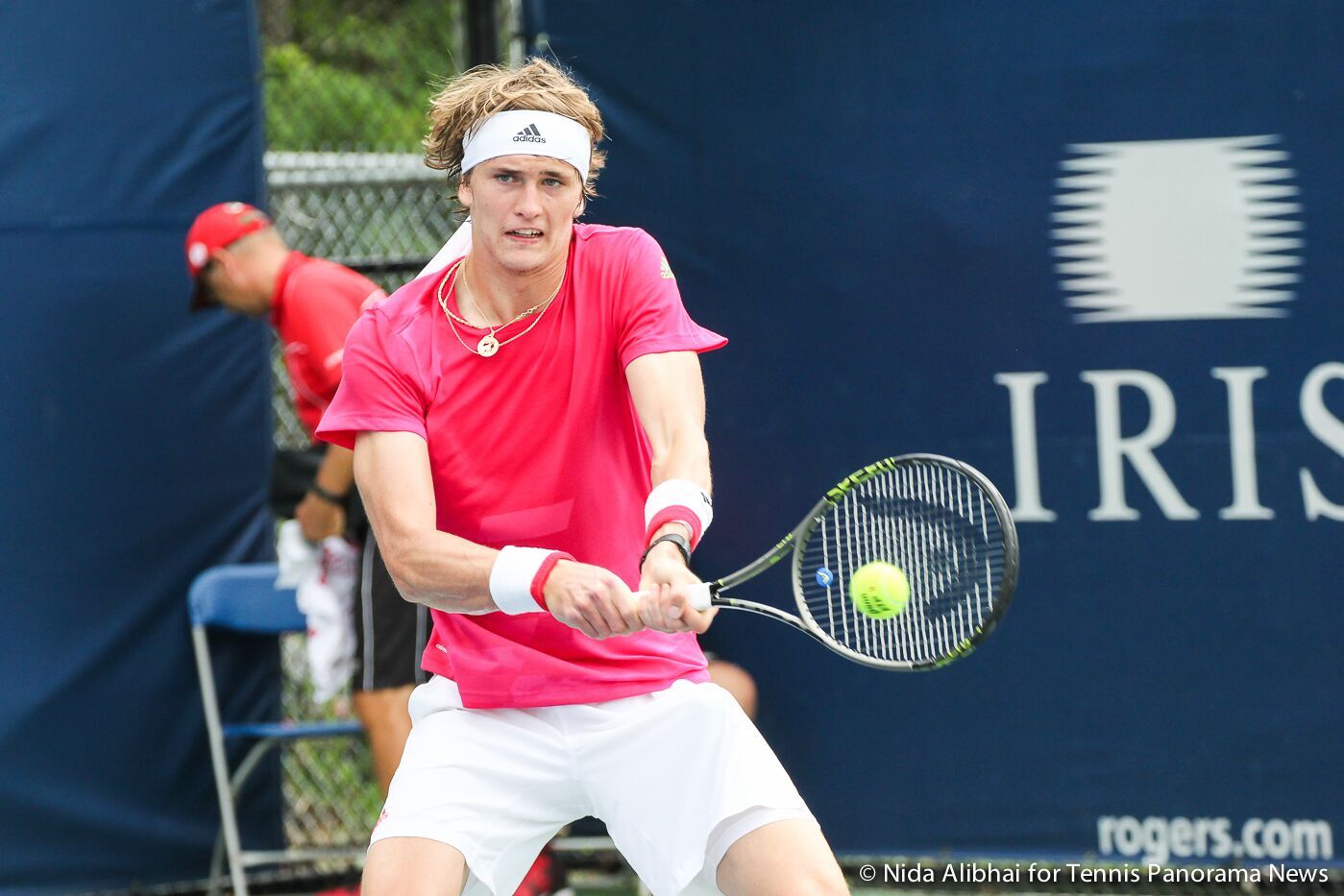 Unseeded Argentine Diego Schwartzman continues his run. The Argentine who beat No. 3 seed Dominic Thiem, rallied from 0-6, 0-2 down to beat American Jared Donaldson 0-6, 7-5, 7-5.

Schwartzman will play Dutchman Robin Haase who upset seventh seed Grigor Dimitrov of Bulgaria 7-6 (3), 4-6, 6-1. This will be the Argentine’s second Masters Series elite eight. He reached the quarterfinals of Monte Carlo where he lost to Rafael Nadal.

In a contest between two unseeded players, Frenchman Adrian Mannarino defeated Korea’s Hyeon Chung 6-3, 6-3 to reach the most important final eight of his career. It’s his first Masters Series quarterfinal in his 31st Masters tournament appearance.