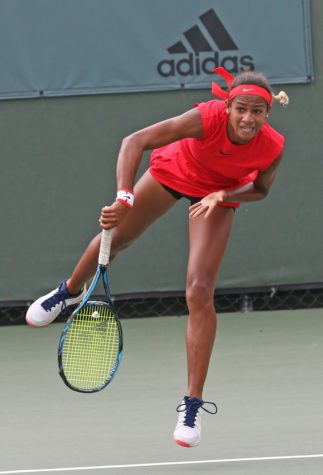 Osuigwe, this year’s French Open Girls’ singles champion, broke Liu’s serve in the 12th game to win the first set. In the second set, Liu and Osuigwe exchanged a total of six service breaks and eventually went to a tie-break.

In the tiebreaker, Osuigwe quickly took a 5-0 lead and looked to be on her way to a straight-set victory. However, Liu, this year’s Wimbledon Girls’ singles champion, staged a dramatic come back and fought off three match points before winning the set to send the match to a deciding third set.

Osuigwe took control of the third set and capitalized on two service breaks to take a commanding 5-2 lead. Liu once again rallied as she broke serve and then held to close the gap to 5-4. However, on her sixth match point of the day, Osuigwe finally served out the match in the tenth game of the set to advance to the semifinals.

After exchanging service breaks at 5-5, the match was decided in a third-set tie-breaker as Chen swept the tiebreak to move into the semifinals.

The Girls’ 16s singles final, which is scheduled for Saturday at 11:30 a.m. (PDT), will feature ninth-seeded Angelica Blake of Boca Raton, Fla., against 14th seeded Nikki Redelijk of Windermere, Fla.

For the latest updated tournament draws, please go to: http://tennislink.usta.com/tournaments/TournamentHome/Tournament.aspx?T=185581#&&s=7

This weekend’s Tennis Channel coverage of the USTA Girls’ 16s & 18s National Championships in San Diego will be as follows:

The USTA Girls’ 16 & 18s National Championships are the premiere hard court tennis tournaments for amateur and professional American girls aged 18 and 16 and under in the United States. In 2010, both age groups began playing their events concurrently at San Diego’s Barnes Tennis Center. Tournament participants, who represent nearly every state in the United States, have been endorsed by their respective USTA Section or have received USTA special exemptions based on their results in qualifying tournaments, junior rankings, or results on the WTA Tour or International Tennis Federation Junior Circuit.  Past tournament champions include Chris Evert, Tracy Austin, Andrea Jaeger, Zina Garrison, Mary Jo Fernandez, Jennifer Capriati and Lindsay Davenport.

For complete scores and results, go to:
http://tennislink.usta.com/tournaments/TournamentHome/Tournament.aspx?T=185581#&&s=8Results0