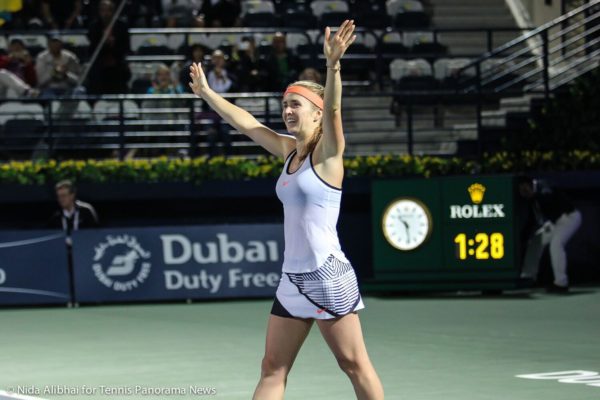 (August 12, 2017) TORONTO, CANADA –  After multiple rain delays in both the afternoon and evening Friday, it was a jam packed day of action on Saturday as four matches needed to be played on a day that typically only features two. After completing one set Friday night, Garbine Muguruza and Elina Svitolina were forced to complete their match Saturday morning due to rain. Svitolina was able to rally back from a set down and win both sets to take the match 4-6, 6-4, 6-3.

The Ukranian laughed after the match that she was going to have to head back to the hotel to get a change of clothes for her second match, scheduled some five and a half hours after completing her quarterfinal match.

While this match was being played, Simona Halep quickly defeated Caroline Garcia in an hour and eleven minutes, 6-4, 6-2, and was off the court before Muguruza and Svitolina could complete their match, despite play starting at the same time. The Romanian saved both break points she faced in the match, and was in complete control as a heavily Romanian crowd cheered her on.

The first semfinal got underway later in the afternoon as Caroline Wozniacki defeated Sloane Stephens 6-2, 6-3 to advance to her second Rogers Cup final and first in Toronto. The Dane managed the match well and navigated bursts of her opponent’s power to win a majority of the longer rallies. “You know, I think I was moving very well and retrieving and just trying to stay aggressive when I could. But it was a difficult match. And I think it was closer than what the score line showed.”

Wozniacki has had a resurgent yet strange year. This will be her sixth final of the year, however she has failed to win a single title in 2017. When asked about if this will cross her mind, she could only laugh. “No, not unless I get asked about it.”

The second semifinal and final match of the day looked set to be a fantastic matchup between Elina Svitolina and Simona Halep. Unfortunately, it was a complete blow out as Svitolina downed the Romanian 6-1, 6-1 in just 56 minutes.

Perhaps Halep summed up the match best. “I have no words. I just didn’t feel the ball, and I couldn’t play.”

Halep struggled from the beginning and never seemed to really get into the match. It was quite windy on court, and early in the match she was stepping on her racquet in an attempt to change up her string tension. She didn’t have much else to say, but tried to stay positive after the match despite a sombre mood. “It’s a semifinal, so it’s not that bad. Big tournament. I played really well also this morning. So it’s just this match that I will forget it very fast for sure. I have just to move on and to look forward. I have many tournaments ahead.”

For Svitolina, it was a chance to avenge a tough loss to her opponent earlier in the year at Roland Garros. “That’s why, from the first point today till the last point, I was very focused and I was just 100% on every ball. And I think, yeah, I just learned. I learned from that experience that you need to play until the last point and just one point at a time.”

This will be Svitolina’s eleventh final at tour level, and she holds a 8-2 record in finals, including a stellar 4-0 record in finals this year having won in Taipei, Dubai, Istanbul and Rome. “2017 been amazing year for me,” said the Ukranian. When I was training during the offseason, I was not really thinking about goals in general. I was just trying to improve. I try to work as hard as I could, and, you know, learn something every day. Starting with a new team, it gave me this push and gave me a new view on the game.”

Svitolina leads the head to head with Wozniacki 2-0. Both wins came on hard courts, winning in Dubai this year and Miami last year. The final is scheduled for 1:30pm EST in Toronto.