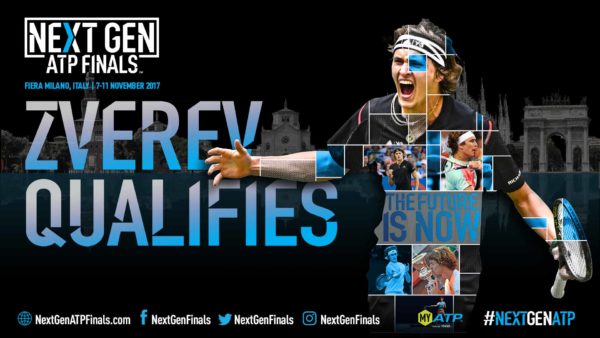 ATP LONDON – Alexander Zverev’s breakout 2017 season has seen him become the first player to qualify for the inaugural Next Gen ATP Finals, to be staged 7-11 November at the Fiera Milano, Italy.

The 20-year-old Zverev will compete in his sixth final of the season Sunday when he battles Roger Federer for the ATP World Tour Masters 1000 crown in Canada. Only Rafael Nadal, seven, and Federer, six, have reached as many or more finals this season.

“I’m excited to have qualified for the first Next Gen ATP Finals in Milan,” said Zverev. “It’s been a great season so far and I hope it can get even better in the coming weeks.”

Zverev, after winning his maiden title last September at the St. Petersburg Open (d. Wawrinka), has raced to the top of the Emirates ATP Race to Milan this season with deep runs on every surface. In February, he won the indoor hard-court title at the Open Sud de France in Montpellier (d. Gasquet). The 6’6” Zverev backed that title up with two clay-court crowns – the BMW Open by FWU in Munich (d. Pella) and the Internazionali BNL d’Italia in Rome, where he defeated then World-No. 2 Novak Djokovic to become the youngest Masters 1000 titlist since a 19-year-old Djokovic won the 2007 Miami Open presented by Itau.

On grass, Zverev reached another final, falling to Federer at the Gerry Weber Open in Halle. But the German quickly returned to his winning ways, taking the Citi Open crown on the Washington, D.C. hard courts last week for his first ATP World Tour 500-level trophy. He enters Sunday’s final at a career-high No. 8 in the Emirates ATP Rankings and with a 45-13 record on the season.

Zverev has taken a commanding lead in the Emirates ATP Race to Milan, but his peers, including Canadian Denis Shapovalov, have made gains on big stages. The 18-year-old Canadian, currently in 11th place in the Race, will surge to fourth with his breakthrough performance on home soil. Shapovalov has beaten Juan Martin del Potro, World No. 2 Rafael Nadal and Frenchman Adrian Mannarino en route to becoming the youngest Masters 1000 semi-finalist (since 1990).

Karen Khachanov, second in the Race, reached the semi-finals in Halle and has made four other ATP World Tour quarter-finals. Russian Andrey Rublev, who will be in fifth place on Monday, celebrated his maiden title last month at the Plava Laguna Croatia Open Umag.

Zverev and seven of the world’s other top 21-and-Under players will compete for total prize money of US$ 1.275 million during the season-ending tournament, which will feature a series of rule changes and innovations to be trialled.