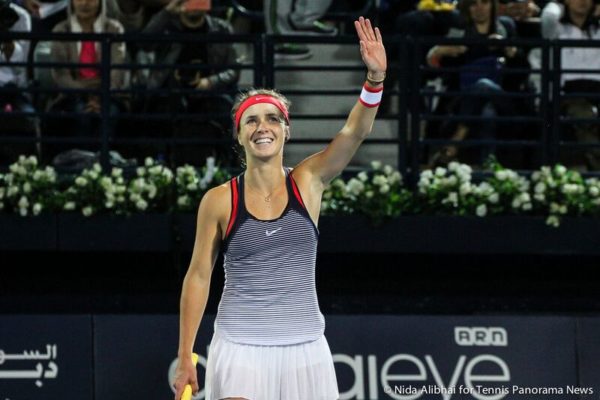 (August 13, 2017) TORONTO, CANADA – Elina Svitolina made it five for five in finals in 2017, defeating Caroline Wozniacki at the Rogers Cup in Toronto on Sunday, 6-4, 6-0. The match started as a grind, with Wozniacki’s typically patient style being matched with equal steadiness across the net. It was long, grinding rallies on the typically slow center court of Toronto.

While it looked like the match might turn into a three set epic, it was all downhill for Svitolina who broke at 4-4 in the first set and did not look back, taking every single game following on her way to victory. The Ukranian did brilliantly to introduce more power to her groundstrokes to get her opponent off balance and push her around.

Toronto is added to a growing list of titles for Svitolina which includes Taipei, Dubai, Istanbul and Rome. She has lost just one set in any of those five finals, and lost just one set all week in Toronto. Svitolina will jump to a new career high of 4 in the rankings on Monday, and now leads the Race to Singapore having won the most points in 2017 so far.

Despite an excellent year, Svitolina’s expectations were quite low coming into Toronto. “Actually when I was coming here, I had no expectations at all, because I was little bit injured. I didn’t know how my body would react. I didn’t feel so good on court and that’s why I came earlier. It was on Wednesday. And, yeah, I had some time here to adapt and prepare and be ready.”
It was a bitter pill for Wozniacki to swallow, who has had nearly the exact opposite luck as Svitolina when it comes to finals in 2017. “It was a tough day. She played well. She mixed up the pace and made it uncomfortable for me out there.”

This was her sixth final of the season, and she has yet to win a single set in any of them, nevermind a match. Regardless, the loss caps off what has otherwise been a successful, positive week for Wozniacki who is feeling strong heading into the US Open. “I wasn’t really expecting much out of myself when I came into the tournament. Obviously I haven’t won a match here before. But it was a good week and I beat some great players, and I can really take a lot with me and be proud of that.”

“Actually, I was very, very tired after the first game of first set. And I knew that I need to give everything because Caroline doesn’t miss much. You have to work really hard to get unforced errors from her.”

Svitolina will now look ahead to Cincinnati and the US Open in particular, where she will surprisingly hope to make her first Grand Slam semifinal, having failed to ever make it past the third round of either the Australian Open or US Open. “It’s a good sign for preparation for the US Open. And, yeah, I just try to keep it up and do my best to prepare and be ready the for US Open.”

Brodie Widdifield was covering the Rogers Cup in Toronto for Tennis Panorama News, follow him on Twitter at @MindTheRacket.