The woman representing Spain, Muguruza prevented No. 2, Romanian Simona Halep from reaching No. 1, destroying her 6-1, 6-0 in less than an hour.

“Honestly, I know it was tough,” Muguruza said. “I was thinking about it. I’m like, Oh, I wish I was in her situation. Must be difficult. But I wanted the title, as well.”

“I think today was my best performance of the tournament, because I felt like I played 20 hours in that court,” noted a smiling Muguruza. “I had very long matches.” 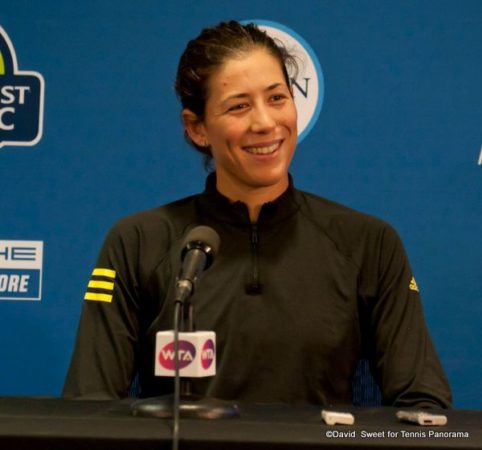 “And it was just there. I think I did few little mistakes and my shots were very, you know, placed, and I think I was doing almost everything right there.”

“Since the first ball, honestly, I knew there was going to be a lot of long rallies, and she’s a very solid player and, you know, very tough, as well.

“I was ready for it. I was looking to play my game, to be aggressive since the first moment, and then after, I was improving a little bit, a little bit more until the second set, also, played better.”

This was also Muguruza’s first tournament win in the United States.

For Halep, it was another opportunity lost to get the No. 1 ranking.

“It’s tough to analyze anymore about this thing, Halep said. “Maybe I feel the pressure and I don’t realize it. Maybe I just played bad. I don’t know what to say. But it’s still there. I have still — I still have a chance. So I will work for it, and maybe one day it will be there.” 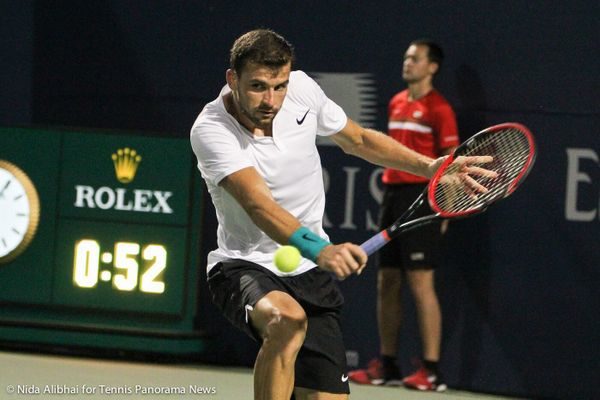 The men’s draw did not have defending champion Roger Federer, Andy Murray or Novak Djokovic due to injuries.

The Bulgarian won the tournament not dropping a set and losing his serve only once. Kyrgios could capitalize on a few break points.

The 25-year-old Dimitrov said the keys to victory were his serve and composure:” I think the first set was very important, for sure. I thought he served pretty well. I think that was getting him out of trouble pretty much every single time, and I knew — I mean, I knew I had to find a way just to get a few balls back and when it was very important.

“I think I did that very well. Yeah, after that, I just had to keep on playing, keep on with my game plan. You know, against him, you never know what’s going to come at you. I mean, he’s a type of player that can do anything and can generate unbelievable amount of power from pretty much any position, so I had to be very aware of that.

“That’s what keeps you on the toes pretty much the whole time. Even if he’s not playing well, there is still, like, weapons and certain plays that he can go to. You know, you have to be aware of that.

“I think it’s what I did very well. I think this is something that I think I did really well today. And, yeah, I think after that, that break in the second set was — it was a tough game. Even after I made that return, I was thinking, like, I don’t think he can serve that many serves anymore out wide, especially he got me there like three, four times before that. I was, like, well, I’m just going to cover the T. If he serves there, good for me. If not, then I have to find another way.

“But I think that was just the key to be very focused and just composed throughout the whole time of the match. I mean, he’s a tricky opponent. Yeah, you have to be aware all the time.”

For the 22-year-old Aussie Kyrgios, this was also his first Masters final.

“Looking back from where I was a couple weeks ago, I would have never thought I would have had my first 1000 event final,” said Kyrgios to media.

“So I’m pretty happy with the result. You know, from where I was to here, it’s just been amazing. It couldn’t have gone to a more deserving player. He’s really got his game back on track. I think he’s starting to be where I think I pictured him being.

“He struggled I think a year ago with his game, but now he’s playing some really good tennis. I’m just really happy to see.

“I’m feeling good. I’m pretty excited for the US Open. I’m just happy, being out there and getting some wins again.”