You are here: Home / Events / US Open Kicks Off First-Ever Fan Week 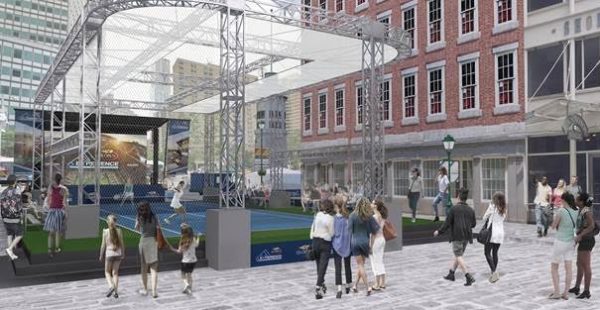 USTA: FLUSHING, N.Y., August 21, 2017 – The United States Tennis Association today announced that US Open Fan Week will kick off tomorrow, Tuesday, August 22, consisting of a series of free events taking place both at the USTA Billie Jean King National Tennis Center, in Flushing, the home of the US Open, and at the historic Seaport District NYC, in Manhattan. US Open Fan Week will give New York area fans the opportunity to celebrate the final Grand Slam of the tennis calendar, and experience the excitement of the US Open in a number of different ways.  Fan Week will go through Sunday, August 27, leading into the opening day of main draw of the US Open on Monday, August 28.

The signature event of US Open Fan Week is the US Open Qualifying Tournament, which will take place Tuesday, August 22, through Friday, August 25, at the USTA Billie Jean King National Tennis Center.  Featuring 128 men and 128 women competing in the singles competition, the event awards the top 16 male and 16 female finishers with entry into their respective Main Draws. This year, the US Open Qualifying Tournament will award almost $3 million in prize money, making it one of the largest purses in American tennis.  Featuring players ranked in the top 250 in the world, this event gives fans the opportunity to watch truly world-class tennis at no cost.

Throughout the duration of US Open Fan Week, from Tuesday, August 22, through Sunday, August 27, individuals in attendance at the USTA Billie Jean King National Tennis Center also will have the opportunity to watch the top players in the world practice in advance of the main draw, including the likes of Venus Williams, Roger Federer, Maria Sharapova, Andy Murray, Angelique Kerber and other past US Open Champions.  Spectators can also show their support for the top U.S. players and rising American stars as they prepare for the 2017 US Open.   This is a unique opportunity for fans to get a glimpse into the training methods and practice plans of their favorite players.  Practice times and court assignments will be announced via USOpen.org and the US Open App, the night prior.  In addition, the official US Open social media accounts will post updates throughout the week.

The US Open will host its fourth annual “Queens Day” on Wednesday, August 23, featuring Queens-based performers, exhibitions and family activities throughout the grounds of the USTA Billie Jean King National Tennis Center in Flushing. Local Queens-based performers, from Ecuadorian dancing to interactive Zumba, will perform throughout the second day of the US Open Qualifying Tournament. Also, in conjunction with the Queens Economic Development Corporation and Chamber of Commerce, information and other offers for Queens businesses will be provided to fans and visitors.

For the first time ever, the US Open will put on the “US Open Experience,” a two-day event that will take place in New York’s historic Seaport District NYC, located in the southern tip of Manhattan.  The two-day tennis festival will be held on Thursday, August 24, and Friday, August 25, from 10:00 a.m. to 8:00 p.m. each day.   Included in activities at the US Open Experience will be an immersive youth tennis Net Generation event on Thursday and the official US Open Draw unveiling on Friday.  Player and special guest appearances, musical acts, food offerings, and other fan activities will take place throughout the event.

The 22nd Arthur Ashe Kids’ Day powered by Net Generation will be at held at the USTA Billie Jean King National Tennis Center on Saturday, August 26.  The annual festival of tennis, music and fun honors the legacy of legendary pioneer Arthur Ashe.  From 9:30 a.m. – 12:30 p.m., kids can try out Net Generation tennis during the free Grounds Festival, plus enjoy live music and other activities for families. In addition, there is a ticketed Stadium Show from 1 p.m. – 3 p.m. featuring top musical acts as well as some of the biggest WTA and ATP World Tour pros in fun exhibition matches and skills competitions. Tickets can be purchased through Ticketmaster (1-866-OPEN-TIX), www.USOpen.org and at the USTA Billie Jean King National Tennis Center box office.

“The US Open is so much more than a sporting event – it is a New York experience – and we want to make sure that every New Yorker has the opportunity to be a part of it,” said Stacey Allaster, Chief Executive, Professional Tennis, USTA.  “With US Open Fan Week, we are giving our fans the opportunity, at no cost, to see some of the world’s greatest athletes train and compete just steps away, as well as enjoy the sights, sounds and tastes of the world’s greatest tennis event.”

2017 US Open to Feature New Fan Experiences and Innovations