You are here: Home / Features / Naomi Osaka Knocks Out Defending Champion Angelique Kerber in US Open First Round

(August 29, 2017) Naomi Osaka netted her first Top Ten win on Tuesday at the US Open, by ousting defending champion Angelique Kerber 6-3, 6-1 in 65 minutes. The 19-year-old woman from Japan is ranked No. 45 in the world.
No. 6 Kerber became the highest ranked opponent defeated by a Japanese player since 2006 at Roland Garros  when Akiko Morigami defeated No.3 ranked Nadia Petrova in the first round.

The last time defending champion lost so early was back in 2005 when Svetlana Kuznetsova lost in the first round.

For Osaka, who let a 5-1 third set lead against Madison Keys slip last year on this very same court, the win is very important.

“Well, it means a lot, I feel, especially since how I ended last year’s US Open,” said Osaka. “But I tried not to think how good she was while I was playing her. I just tried to focus on what I could do to win the match, if that makes sense.”

“I felt the same type of nerves come up, 4-1 in this match, so I wanted to tell myself just to keep playing how I was playing and not let the nerves get over me as much as last year.”

“I felt really relieved, especially since I was so nervous on the last point. I just barely returned the serve.

“I just really didn’t want to play a long point on the last one, so I was really glad when she made an error.

“Yeah, I was really happy because I grew up watching the greatest players play on that court, so to win a match on it felt really special.”

“It was not my day, completely not my day today,” Kerber said. “Of course, matches are always different than practice, and I just can say that I was practicing a lot in the last few weeks and months.”

“I think she’s a very aggressive player, but I know this before,” noted last year’s champion.” She served very well and was going for it. Yeah, she played a very good match from the beginning.”

Asked if she was nervous before the match, she said: “Of course, you’re always nervous when you go out there and it’s the first rounds in the Grand Slams, but when I walk on court, I was feeling actually okay.”

“I was trying to finding my rhythm then, and especially in the important moments, but, yeah, sometimes it’s not working like you want.” 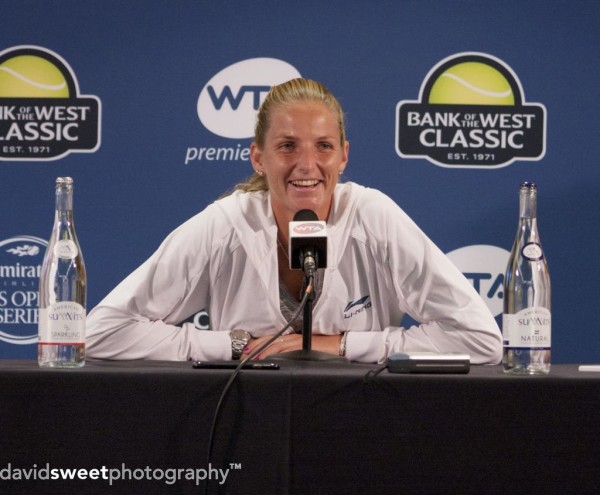 Earlier on Tuesday, playing her first major as the No. 1 player, Karolina Pliskova hit 29 winners beating Magda Linette 6-2, 6-1 in the first round of Flushing Meadows under the closed roof of Arthur Ashe Stadium.

The game could be better. I think serve could be better, but overall, I think it was solid. She hit 8 aces during the match adding 1600 dollars to her charity – #AceQeenCharityInitiative. She will donate 200 dollars for each ace she serves in the tournament to a Czech hospital.

Due to the rain, all outer court play was suspended and postponed until Wednesday. 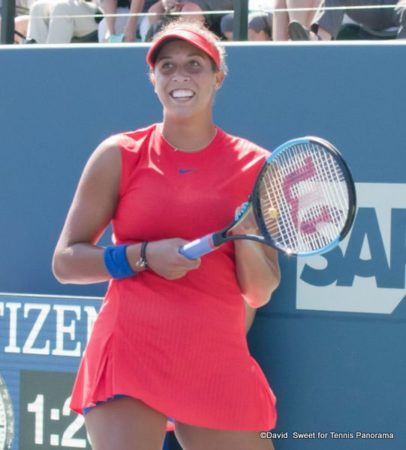 In the night session, 15th seed Madison Keys hit 32 winners in her 6-3, 7-6(6) win over Elise Mertens of Belgium to reach the second round. Keys has made the round of 16 each of the last two years.

“I’m really happy that I got it done in straight sets,” Keys said. “I guess I had time to add a bit of drama to the match, but glad I didn’t add too much.

After Rafael Nadal’s win on Ashe earlier in the day, he complained about how noisy it is with the roof closed. Keys agreed: “Truly it was the loudest court I’ve ever played on in my life. I’m assuming it had to do with the roof just holding all of that noise in.

“It took a while to get used to it. But then it kind of just seemed — like if it became silent all of a sudden, it probably would have felt really weird.”