(August 31, 2017) FLUSHING MEADOWS, NY – Five-time former champion Roger Federer made a great escape to reach the third round of the US Open beating Mikhail Youzhny 6-1, 6-7, 4-6, 6-4, 6-2 on Thursday. He is now 17-0 against the Russian in head-to-head play. Youzhny was dealing with cramps towrds the end of the match.

This is the first time that Federer has had five-set struggles in the first two rounds of major tournament.

“These five-set battles are actually quite a lot of fun,” The No. 3 seed Federer said in his on-court interview with ESPN’s Darren Cahill in Arthur Ashe Stadium, “and I feel quite warmed up by now.”

The 36-year-old Federer hit 68 unforced errors during the match, some thought that his back problems were resurfacing. He dismissed his back issue and blamed it on lack of preparation: “I’m better than the first round, so I’m happy,”he said. “Yeah, this match wasn’t about the back, which is good. This is more just a grind. I felt different, completely different, the way it played and everything. But I’m really, really happy I got through.”

“I think in a way it’s pretty simple to analyze just because of my preparation, not been able to hit any returns almost, the serve, not going full in practice. You just have a bit lacking rhythm, whatever it may be.

“When the match comes around, you’re more susceptible to being a bit up and down. If you get broken once or twice a set, it’s hard to win those sets consistently. That’s what I was doing so well through Wimbledon, through other tournaments where I just protected my serve at will and always in a nice way. The margins are so small. Even if I’m winning in straights, margins are still small.

“When you’re not feeling your best right away, you get broken or you lose sets, then it becomes a completely different match. The way it’s also played by your opponent. I think really Mikhail was also able to pick it up today. He was playing very well at one stage. Then you have to break the code again.”

He missed last year’s US Open as he took the second half of the year off to rehab his knee.

Federer will be playing 31st seed Feliciano Lopez of Spain in the third round. The Swiss has been playing him since the juniors.

“So here we are. It is what it is. I’m pretty confident that I’m only going to get better from here. That’s a good thing. Because I’ve played a lot, I definitely found some rhythm now, even though it’s going to be a different serve coming my way, lefty. But I know Feliciano also really well, like I know Mikhail really well. I think that plays in my favor a little bit.

“So, yeah, good thing was that I started well today after not doing that at all in the first round. So I think that to me is also encouraging. I just got to iron out those little ups and downs that I’m having a little bit so it’s not too extreme, think I think I’m going to play better.”

“There is nerves there at the beginning, Nadal said, “when you have some nerves, when you don’t convert Love-30s, couple Love-30s in a row, 15-30s, then some breakpoints, you arrive to 4-All. The opponent, very first breakpoint, he make it. Well, he make it? Of course, I miss it. Yeah, you feel one set down. Then, of course, you play under more pressure.

“Tough start of the second. Happy to be back. I think the speed was positive. Was a good fight. I think I improved. The last two sets I played better, and that’s important for what’s coming, no?

“But, of course, is a day to be satisfied. Days that you’re not playing well, that’s makes the difference: win when you don’t play very well. That give me the possibility to play better.

“As I say the other day, I am practicing well. I need to compete better. I believe I can do it.”

The two-time US Open winner will play Leonardo Mayer for a spot in the round of 16.

“I need to play better than what I did if I want to have chances of success. That’s what I going to try to do.” 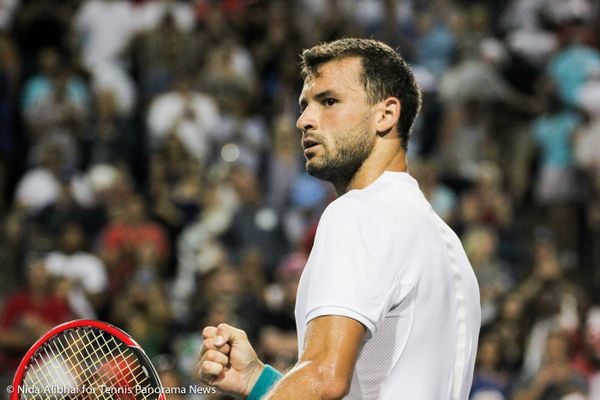 Two upsets on the men’s side on Thursday – No. 7 seed Grigor Dimitrov of Bulgaria and 15th seed Czech Tomas Berdych.

Rublev fought back from a break down in each of the first two sets.

“I think my style of the game is just to play aggressive, to try to play my rhythm because I have quite, I think in my opinion, quite well rhythm, that I can play, compete with many good guys. I think this is one of the main things of my game.”

With Dimitrov’s exit, only four of the top ten players are remaining in the US Open. Four did not play – Andy Murray, Novak Djokovic, Stan Wawrinka and Kei Nishikori and Alexander Zverev who lost on Wednesday.

The Ukranian Dolgopolov has been named in a match under investigation due to unusual betting patterns in a match at the Wimston-Salem tournament.

Other men’s seed advancing on the day were sixth seed Dominic Thiem, No. 9 seed David Goffin, No. 11 Roberto Bautista Agut, No. 18 Gael Monfils, No. 24 Juan Martin del Potro, No. 30 Adrian Mannarino No. 31 Feliciano Lopez, and No. 33 Philipp Kohlschreiber.