You are here: Home / Features / Diego Schwartzman Stuns ’14 Champ Marin Cilic To Reach US Open Round of 16 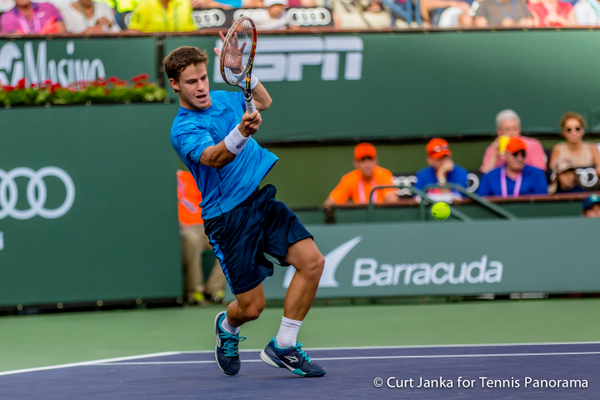 (September 1, 2017) FLUSHING MEADOWS, NY – No former major finalists remain in the bottom half of the men’s draw, thanks to world No. 33 Diego Schwartzman of Argentina. The five-foot, seven-inch Argentine was David to six-foot-six-inch 2014 US Open winner Marin Cilic’s Goliath winning 4-6, 7-5, 7-5 6-4 to reach the round of 16 at the US Open on Friday.

The fifth-seeded Cilic hit 80 unforced errors to his opponent’s 48 in the 3-hour and 24 minute match.

The 29th seed is in the fourth round of a major for the first time.
Schwartzman: “I think all the match was like this, was up and down. Every time in the third set, as well. I was a break up two times, I think, and then I can close the third set 7-5.

“Then in the final of the match I think I start to be a little bit nervous. When I served 5-2, I think he played much better than me. I didn’t do many mistakes. But then in the 5-4, it was just one break, and there it start the nerves in my body and was really tough the last game, but I can win and I am really happy.”

What does he say about being an inspiration to shorter people: “I hope maybe they can understand tennis is for everyone. Is not just for the tall guys.”

He’ll play 16th seed Lucas Pouille for a place in the quarterfinals.
“I think my confidence, it’s going up,” Schwartzman said. “I think in every match I can win. I am playing well and try to be like this every match.” 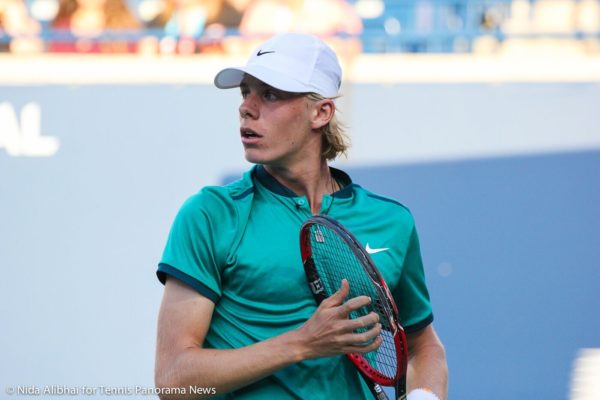 Denis Shapovalov of Canada is the youngest man to make the US Open’s fourth round since Michael Chang was 17 in 1989. He defeated Britain’s Kyle Edmund when he was forced to retire with a neck injury trailing 6-3, 3-6, 3-6, 0-1.

I guess it’s like an upper thoracic back problem,” Edmund said. “ So, yeah, it just got very sore and very tight and almost like locked up a bit. I didn’t feel like I could rotate properly.”

The 18-year-old Shapovalov is s the first qualifier to reach this stage of a major since 2008.

“The month of August has been absolutely life changing for me,” says the Canadian. “I’m actually very thankful for my team for helping me stay humble and just prepare for every match, like it’s another match, but I feel like after the Open, I’m going to have a little bit of time to take it all in, everything that’s been happening to me. And, yeah, you know, I’m playing great tennis and I’m just trying to take it one day at a time.”

Asked about how open the bottom half of the men’s draw has become with the Cilic upset, the American said: “Everyone was watching that in the locker room. It felt a little open even before he beat him, I think partly because Marin hasn’t even played this summer. He’s obviously really good. But he came in here with very little preparation. Even before that I think guys saw that it was open.”

Querrey will play 23rd seed Mischa Zverev for a place in the quarterfinals.

Zverev defeated 10th seed American John Isner 6-4, 6-3, 7-6(5). The lefty serve-and-volleyer is trying to reach his second final eight of a major this season. He was also in the quarterfinals at the Australian Open.

Zverev, the older brother of Alexander Zverev talked about his unique style play – did he choose it or did it chose him:

“I think my baseline game was not good enough, so I had to choose Plan B, which was serve and volleying to try to be successful on the court. My dad was a serve-and-volleyer, too. He was very intelligent and smart as a coach because he recognized baseline is good, but I don’t think you can fulfill your potential by staying on baseline so let’s try something else.

“He taught me how to volley, how to come in, how to approach certain shots, analyze players and their passing patterns. He was the one who taught me how to serve and volley and play well at the net.

“I think it was a combination of just life happened, and luckily dad recognized I was a better serve-and-volleyer than baseliner, and I said, Okay, I agree.”

Isner was very disappointed with his loss: “I felt like at times I was close. I really just couldn’t pass him is what it comes down to, plain and simple.

“I had looks. I had little looks here and there. Didn’t do what I needed to do. I don’t know what it is. I struggle playing at night at this tournament. I don’t think I’ve ever won a match at night here. Haven’t lost many matches in the day, so…

“Just I don’t know. It sucks. You want to play better out there. It just didn’t.

On playing Querrey in the fourth round, he said: “I think his backhand is pretty good. He doesn’t have, like, a weaker side, which is going to be I think tougher for me because I would have to really mix up my game and try to find the weaker spot.

Qerrey on having to play Zverev: “He’s having a great year. It’s never fun to play a lefty. Most lefties are crafty. He’s the craftiest of all the lefties.”

Other men’ advancing to the round of 16 include (12)Pablo Carreno Busta,  (16) Lucas Pouille, (28) Kevin Anderson and  unseeded Paolo Lorenzi.