You are here: Home / Contributors / Final Day at Davis Cup – Victory for the USA

Peter, Eileen and Holly Barnes-Wallis are part of a group called the Netheads â€“ these tennis fans cheer on the United States Davis Cup team. They blogged about their experiences during the USA-Chile Davis Cup tie in Santiago.

Victory for the US in the Davis Cup

The final dayâ€™s play started in slightly cooler conditions in Santiago â€“ although the sun soon broke through.

Andy Roddick performed what is now becoming a familiar feat by clinching victory for the US team, though the match didnâ€™t quite start off as expected. Paul Capdeville served first and the early games were characterised by long rallies.Â  Roddick broke serve first, in the fifth game for a 3-2 lead, only to see Capdeville break back and then break again, with a volley at the net, after holding his own serve.Â  He then served out the first set; 6 3 to Chile.

The second was a long, tough set, which was ultimately settled in the USAâ€™s favour in a tie break.Â  Half way through the set, Capdeville started working the noisy crowd, who served up their first Mexican Wave at 5 all. While the atmosphere was good, the crowd was not always well behaved â€“ choosing to cheer every service fault by the American and often whistling during his service.Â  This did not stop Andy from playing a strong tie break, sending the Chilean sprawling to take the first mini-break at 2-0 before going on to establish a five point lead and to take the tie break 7-2.

The third set started and finished with service breaks, ending with a double fault by Capdeville.Â  Set to Roddick, 6-3.

Another early break for Roddick in the fourth set.Â  At 2-1 an awkward bounce led to a Capdeville error and break point.Â  Capdeville hit it long for Andy to take a 3 -1 lead. At 4-2 Capdeville set up two break points but Roddick saved them both to go up 5-2.Â  The first match point came in the next game but the Chilean held on, forcing Roddick to serve the match out and win 3-6, 7-6, 6-3, 6-3.

Scenes of celebration followed, as the Americans had clinched the tie.Â  They lined up for a team photo before John Isner came out to play the â€˜dead rubberâ€™.Â  Although he did not appear to be feeling well, Isner Â emerged the winner 6-3, 6-7, 7-5 over Guillermo Rivera-Aranguiz, leaving the final score for the tie at 4-1 to the USA.

So it was a rewarding visit for the Netheads, although we were uncharacteristically quiet, rather than stir up the Chilean fans too much.Â  However, as is the case everywhere we go, we were asked to pose for pictures with the visiting fans, hopefully acting as good ambassadors for the US Davis Cup team. 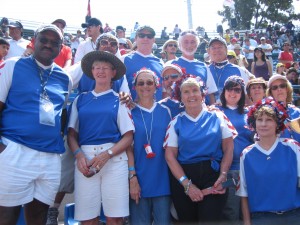