The 24th seed from Argentina came into match suffering from a virus and looked droopy on court for the first two sets, losing them easily. He was given something by the trainer, which seemed to make feel better towards the end of the second set.

“I was trying to retire the match in the second set,” Del Potro said. “Then I saw the crowd waiting for more tennis, waiting for my good forehands, good serves. I took all that energy to change in a good way and think about fight and not retire.

“I did well, and I start to enjoy little bit more about the fans. I think I did everything well after the third set. The crowd enjoy with me all points. It was unbelievable atmosphere.”

“I was thinking to retire in the middle of the second set because I couldn’t breathe, I couldn’t move well. Dominic was dominating the match so easy,” said the Argentine.

“But then when we start the third set, I broke his serve very quick, and then I won the set in 20 minutes. Then the history change a lot. I starting to see the crowd. I took all the energy from the fans. That’s what I did in the end, just keep fighting. I don’t give ups any points from the third until the fifth set.

“I was ready to win the match in that moment.”

“I mean, of course the crowd was on his side,” Thiem said. “But it was a great atmosphere. I mean, we’re not playing every day in an atmosphere like this. I was enjoying it actually. I mean, the crowd was not unfair at all. So it was fine. The crowd didn’t affect the result of the match.”

“The third set was bad. I mean, I played some really bad minutes,” Thiem said. “It was a great match I think, set four and set five. Obviously for the better end for him.”

The 2009 US Open champion won the match in the fifth set when Thiem double faulted on match point.

The match lasted three-hours and thirty-five minutes on the Grandstand court.

“I don’t know how I was able to win that match,” del Potro said in his post-match interview on court. “I was sick the last two days and I tried to play as best that I can. When I saw this crowd cheering for me, I was trying to feel better. I fought like this because of these guys.”

At the end of the match, del Potro had his arms raised towards the sky.

“I play one of the epic match of my career here in the US Open, which is my favorite tournament, in front of a great crowd. I got exhausted after the last point of the match. That’s what I did with my hands, looking the sky.

“But I’m so glad to go through. I’m play a fantastic battle against one of the best players of the tour.”

This marked the first time that del Potro won a match at a major from two sets down. 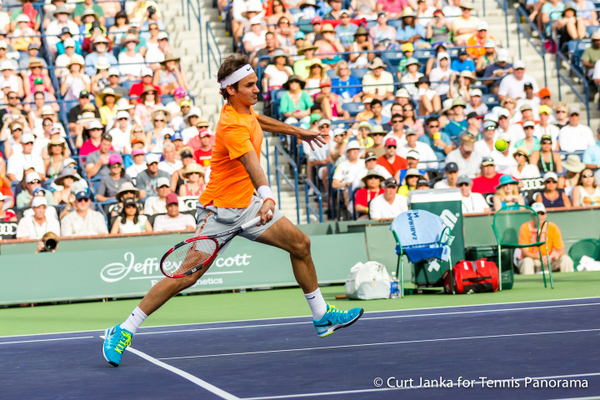 Five-time US Open champion and third seed Roger Federer had a straight-forward match win over 33rd seed Philipp Kohlschreiber 6-4, 6-2, 7-5 in the Monday night session at the US Open. After the second set the Swiss took a medical time out off court to get his “bottom” rubbed. Back on the court, he showed no signs of an injury in the third set and closed out the match in an hour and 49-minutes.

“I just felt something, sort of my muscle being tight at the back,” the Swiss explained in his news conference. ” Sort of my quad, I guess. I don’t know what you call it.

“I just wanted to get it done really quickly after the set break. I said, Look, you know what, I need to go anyway off court for it. Normally you have to ask. They would have said anyway yes. I just ran straight to the physio. I was done in three minutes and back again.”

This sets up a re-match of the final of the 2009 US Open in which del Potro beat Federer in five sets for the title, his only major.

Federer talked about that 2009 final: I remember we had a good breakpoint early that put me ahead, I think, in the first set. I’m not sure. I felt like that I left that match with a lot of regrets.

“I just had all these chances in multiple moments. The only time when he was really better, in my opinion, was the fifth set. Obviously that was good enough to beat me that day. It was a good match. A lot of back and forth. Crowd was really into it. Started in the day, finished in the night.

“I mean, look, I was not too disappointed I don’t think because I had a great run, you know, winning I think French, Wimbledon, birth of my girls. Making the finals here was actually a good run. But it ended my five-year reign here in New York.

“I guess I was a bit disappointed, you know. But Juan Martin did play extremely well. He beat Rafa and me back-to-back, so I felt like he deserved it at the end.”