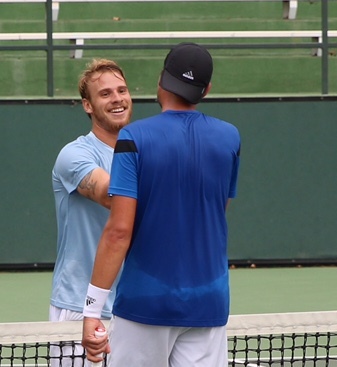 Just like he did warming up with his doubles partner Deiton Baughman before he faced him in a Saturday semifinal, Sell warmed up against his final opponent and good friend Redlicki before the two squared off.

“He warmed me up for every dual match during my senior year,” said Sell, 23, who won his first Futures title. “It’s not like we’re going to learn something new in 20 minutes. It’s fine. It was a nice way to warm up.”

“I’m actually feeling pretty good right now,” said Sell, who did have the benefit of a walkover in singles and a second-set retirement versus Baughman on Saturday as part of his 13 wins. “I thought I’d be more sore at this point.”

The Redondo Beach resident Sell did not receive a special exemption so will not play singles this coming week in Laguna Niguel, but will play doubles with Baughman. The following week he will play singles at the Fountain Valley Futures, and doubles with Redlicki.

Sell will cash a nice check worth $2,160 and Redlicki will deposit $1,272 for his runner-up appearance, although he can only claim expenses as he is still an amateur. Maybe more importantly for Sell is the 12 valuable ATP ranking points he receives. Before the tournament, Sell had just four total ATP points during his career.

The final was tight from the start, with both players holding their strong serves early. “It was a pretty close match, and I knew it would be decided on the big points,” Sell said.

It’s quite a start to pro tennis full-time to a player who spent the summer playing Men’s Open events, and last college season as the volunteer assistant at Pepperdine.