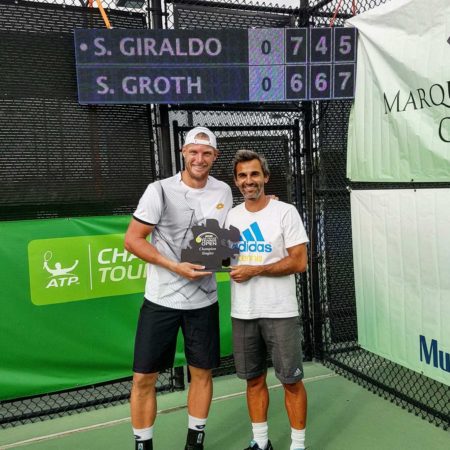 Matches will take place starting Saturday with qualifying at the Fertitta Tennis Complex on the campus of UNLV. Once again this year the tournament’s presenting sponsor is The Orleans Casino and the tournament’s official partner is the Andre Agassi Foundation for Education. The official charity is the Marty Hennessy Inspiring Children Foundation.

Main draw singles and doubles matches begin on Monday with the finals in both set for a week from Sunday, Oct. 22. The tournament director is Jean-Francois Blais and the tournament host is once again Owen Hambrook, the UNLV head men’s tennis coach.

“We are excited to get things started here at the LVTO as we are looking at another very tough draw for our third year,” Blais said. “Although Vegas is a fun stop for the players on the ATP Challenger Tour, the guys come here to compete hard and leave everything on the court, which ends up being a real treat for the fans and all of us who love the game.”

Last year, the 29-year-old unseeded Groth ended No. 4-seed Santiago Giraldo’s nine-match winning streak as he got past the Colombian in an exciting final match taking the title, 6-7 (4), 6-4, 7-5. Groth hammered 30 aces – to just one double fault – giving him a total of 95 total in his five matches, compared to just 33 for the next highest player.

In the doubles final, the top-seeded team of Brian Baker from Nashville, Tenn., and Matt Reid from Australia beat the American team of Bjorn Fratangelo and Denis Kudla, 6-1, 7-5.

The top-seeded player in next week’s Challenger is 26-year-old Tennessean Tennys Sandgren, who broke into the Emirates ATP Rankings Top 100 for the first time earlier this month at No. 97. He is joined in the draw by fellow American Michael Mmoh (current rank No. 153) and 24-year-old Bjorn Fratangelo, who made the semifinals of the ATP International Tennis Hall of Fame Championships, as well as recording a first-round win at the US Open Championship against big-serving Ivo Karlovic.

Other young Americans to watch include Reilly Opelka, a 20-year-old from Florida who stands 6-feet, 11 inches; South Floridian Stefan Kozlov, who is just 19 years old; and former NCAA singles champion (2016) from UCLA Mackenzie McDonald. British player and former TCU star Cameron Norrie has been on a tear of late winning Challenger titles earlier this month at Tiburon and Stockton. Norrie will be seeded and has moved up more than 100 positions in the rankings in the past month where he currently sits at a career-high No. 111.

Former University of Virginia player from Southern California JC Aragone has been awarded a main draw singles wild card. Aragone has had quite a year, first clinching the deciding point to give the Cavaliers the NCAA team title in May, and then qualifying for the US Open and playing in his first Grand Slam main draw at the end of August.