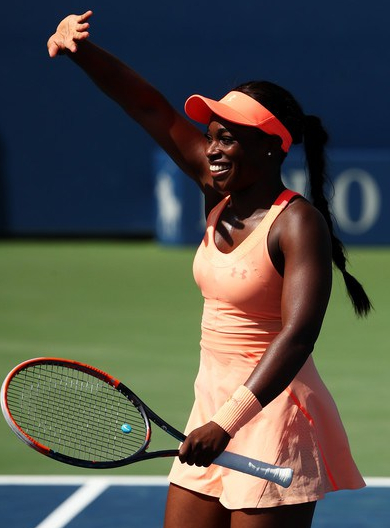 ALONG WITH SHELBY ROGERS AND ALISON RISKE,

TO COMPETE FOR THE FED CUP TITLE AGAINST BELARUS IN MINSK,

WHITE PLAINS, N.Y., November 1, 2017 – The USTA and United States Fed Cup Captain Kathy Rinaldi today announced that 2017 US Open Champion and world No. 13 Sloane Stephens, 2017 US Open and Australian Open semifinalist and world No. 12 CoCo Vandeweghe, No. 59 Shelby Rogers and No. 70 Alison Riske will represent the U.S. in the 2017 Fed Cup by BNP Paribas World Group Final against Belarus.

The best-of-five match series will be played at the Chizhovka Arena in Minsk, Belarus, Nov. 11-12, on an indoor hard court. Chizhovka Arena hosted Belarus’ two other home ties earlier this year.

The U.S. Fed Cup team made its last appearance in the Fed Cup Final in 2010, when a team featuring Vandeweghe and Bethanie Mattek-Sands lost to Italy, 3-1, in San Diego. The U.S. won the last of its record 17 Fed Cup titles in 2000. U.S. Captain Kathy Rinaldi, who is in her first year as captain, follows Mary Joe Fernandez to make it back-to-back U.S. captains to reach the Fed Cup Final in their debut year. Belarus will be competing in its first-ever Fed Cup Final.

Earlier this year, the U.S. swept Germany, 4-0, in the World Group First Round in Maui, Hawaii, then posted a 3-2 semifinal win in April over defending champion Czech Republic, clinching the victory in the fifth-and-decisive doubles rubber in Tampa Bay, Fla. Belarus defeated the Netherlands, 4-1, in the World Group First Round, then defeated Switzerland, 3-2, in the semifinals.

The U.S. holds a 1-0 record over Belarus in Fed Cup competition, sweeping the Belarusians, 5-0, in the World Group II First Round in February 2012 in Worcester, Mass. The American team for that tie was comprised of Serena and Venus Williams. New world No. 1 Victoria Azarenka was named to the Belarus team for that tie, but she had to withdraw due to a lower back injury after winning the Australian Open a week prior.

Stephens, 24, of Fort Lauderdale, Fla., is ranked No. 13 in the world. She won her first career Grand Slam singles title by capturing the US Open this year after being ranked as low as No. 957 in July, her ranking having dropped after she missed 11 months following surgery on her left foot. At the US Open, Stephens defeated compatriot Madison Keys in the first All-American final since 2002. Stephens, who was No. 83 entering the Open, upset five seeds en route to the title, including Venus Williams. Prior to the US Open this summer, Stephens, who was away from the game for surgery from the 2016 Rio Olympics to 2017 Wimbledon, reached the semifinals of back-to-back US Open Series events in Toronto and Cincinnati in the third and fourth tournaments of her comeback. She holds five WTA titles (Washington D.C. in 2015; Auckland, Acapulco and Charleston in 2016; and the US Open in 2017). In 2013, Stephens defeated Serena Williams en route to the semifinals of the Australian Open. That same year, she advanced to the quarterfinals of Wimbledon to peak at No. 11 in the world. She has competed in four Fed Cup ties for the U.S., making her debut in 2012 and last playing for the U.S. in the 2016 World Group II First Round in Kailua-Kona, Hawaii. In 2010, Stephens won the girls’ doubles titles at the French Open, Wimbledon and the US Open, and reached the singles quarterfinals or better at the same three junior Slams. She is the daughter of the late New England Patriots running back John Stephens. Her mother, Sybil, was an All-American swimmer at Boston University and qualified for Olympic trials in three events.

Vandeweghe, 25, of Rancho Santa Fe, Calif., is ranked a career-high No. 12 in the world. She reached the semifinals of both the US Open and the Australian Open this year—her career-best Grand Slam results. In New York, Vandeweghe upset world No. 1 Karolina Pliskova in the quarterfinals to become one of four American women in the semifinals, marking the first time all four women’s singles semifinalists had been American at the US Open since 1981 – and at a Grand Slam tournament since Wimbledon in 1985. In Australia, Vandeweghe upset three seeded players, including then-world No. 1 Angelique Kerber. Vandeweghe also advanced to the quarterfinals of Wimbledon in 2015. She holds two WTA singles titles, both won in Den Bosch, Netherlands, in 2014 and 2016. She represented the U.S. in the 2016 Olympic Games in Rio in women’s doubles and advanced to the doubles semifinals at the US Open in 2015 and 2016 and the quarterfinals at the Australian Open in 2016. She captured her first WTA doubles title at Indian Wells in 2016 with Mattek-Sands. Vandeweghe has played in six Fed Cup ties for the U.S., holding a 5-3 record in singles and a 4-0 record in doubles. She played a crucial role in leading the U.S. Fed Cup team to the final this year, winning both of her singles matches in the first round in Maui and then winning both of her singles matches in the semifinal in Tampa Bay and clinching the tie for the U.S. in the fifth-and-decisive rubber to become the first U.S. Fed Cup player since 1996 to win three live matches in one tie. As a junior player, Vandeweghe won the 2008 US Open girls’ singles title. Her mother, Tauna, was a member of the U.S. national team in both swimming and volleyball, and her uncle is former NBA star Kiki Vandeweghe.

Rogers, 25, of Charleston, S.C., is ranked No. 59 in the world. This year, she reached three WTA quarterfinals (Charleston, S.C., Strasbourg, and Hobart) and upset No. 4 seed Simona Halep in the first round of the Australian Open. Rogers also reached the third round of the US Open, French Open, and Wimbledon this year. She peaked at No. 48 in the world in January and gained her first career Grand Slam quarterfinal at the 2016 French Open, upsetting three seeds en route. Also in 2016, she reached her second career WTA final at the Rio Open. As a junior player, Rogers won the USTA Girls’ 18s National Championships to earn a wild card into the main draw of the 2010 US Open for her first appearance in a Grand Slam event. She is competing in her third consecutive Fed Cup tie after making her debut earlier this year in Maui, where she competed in doubles with Mattek-Sands. She also played singles in the semifinal in Tampa Bay.

Riske, 27, of Pittsburgh, is ranked No. 70 in the world. Riske, who peaked at No. 36 this May, had a strong start to 2017, highlighted by reaching her fifth career WTA singles final, in Shenzhen, and advancing to the third round of the Australian Open. She also advanced to the third round of Wimbledon this year. She holds one WTA singles title, won in 2014 in Tianjin, China. Her career-best Grand Slam result came in 2013, when she defeated then-world No. 7 Petra Kvitova en route to the fourth round of the US Open. Riske represented the U.S. in Fed Cup in 2014, 2015 and in this year’s first round in Maui. She trains at the new USTA National Campus at Lake Nona in Orlando, Fla.