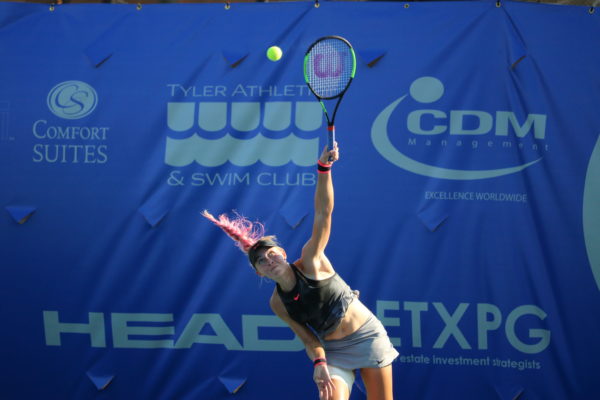 After dropping her first set of the week in fairly meek fashion, 6-1, things were not looking good for Kratzer. Gibbs’ variety and point in, point out consistency looked like it was going to be too much for the young American. Early games in the second set proved critical; Kratzer found her forehand and started to dictate play from the back of the court.

“I could not get my timing in the first set,” Kratzer said. “She was hitting the ball pretty big and I couldn’t figure it out. So to start the second set I just tried to think about ways to keep her from getting her favorite shots. As soon as I did that I started playing better.”

“Physically I’m feeling great,” Kratzer said. “Qualifying wasn’t too tough on me this week; last week(Macon) was a lot harder.”

Thursday’s marathon match squared Irina Falconi (Manhattan, New York), the tournament’s number seven seed, against Rebecca Peterson of Sweden. Peterson led at many different stages of the match, including 5-3 in the third set, but 27 year old Falconi used her experience on tour to eventually come back and win 7-5 in the third set after three hours and five minutes of play.

“I literally kept telling myself, ‘make her play every single point’,” Falconi said. “There were a lot of momentum shifts, so I tried to stay within myself the whole time. The last time I got through a gritty match like that I won the tournament, so maybe it’s a good omen.”

Taylor Townsend(Chicago, Ill) continued her good form with a routine win over Sophie Chang, and also booked her spot into the doubles semifinals, partnering with Jessica Pegula. Falconi and Townsend are the only two players remaining in both the singles and doubles draws.

Live streaming, live scores and draws can be found at www.RBCProChallenge.com.

Related Article: Ashley Kratzer: From After-School Programs to the US Open