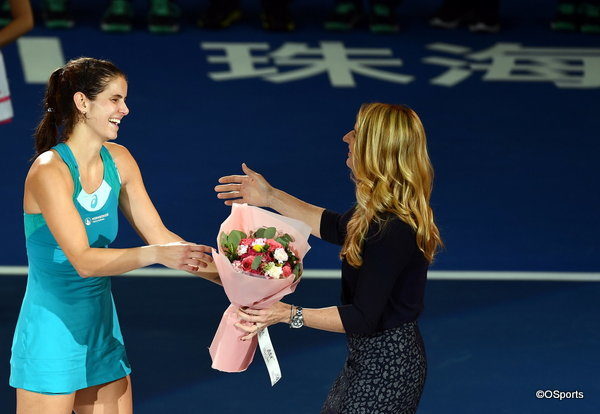 (November 5, 2017) Julia Goerges is the 2017 Hengqin Life WTA Elite Trophy Zhuhai champion after a 7-5, 6-1 win over CoCo Vandeweghe in Sunday’s final of the season-ending event.

The win marked the biggest title of the 29-year-old German’s career and was made all the more special by the presence of her idol, countrywoman Steffi Graf, who was in Zhuhai to watch the final and be part of the trophy presentation party.

“We did speak before the match, because I just quickly saw her,” noted the winner. “I think she was very happy to give the trophy to a German player.”

“Overall I think for me it was a special moment to win my biggest title and receive the trophy from Steffi and share the moment with her and even get her in the picture. It’s very rare. I know this. I think that’s probably worth it more than millions.”

“I can’t imagine a better ending to this season; two titles in two weeks and this is the biggest one,” said Goerges in her speech on court.

“I felt a little flat today but Julia played really well,” said Vadeweghe. “She finished by having a great two weeks; I’m just a little bit disappointed by how flat I came out for a final. I just didn’t have any fire for today. I was hitting the ball well and I was playing well but in the fighting moments I was flat. Some days you have it, some days you don’t and Julia was able to take advantage of a day I didn’t have it.”

Vandeweghe, despite the loss had a career year, reaching the Top Ten for the first time.

“The positive that I take away is that this tournament has got me to Top Ten. I still have more goals to achieve so it hasn’t really hit me.”

“It’s funny because you look back at a year and think how difficult it was for me and then you realise ‘jeez’, I reached so many milestones and so hit so many roadblocks and passed them and I didn’t even realise it a couple of days or weeks after, and I’m sure that will happen with my Top Ten milestone. I’ll have a moment with my Mom and my family and maybe it will sink in.”

The American’s season is not over yet, shell be playing in the Fed Cup final for the United States. “The year’s not over so hopefully there’s something else to be really proud of and really excited about. To play for your country is a huge thing for me and I take the responsibility very seriously.” 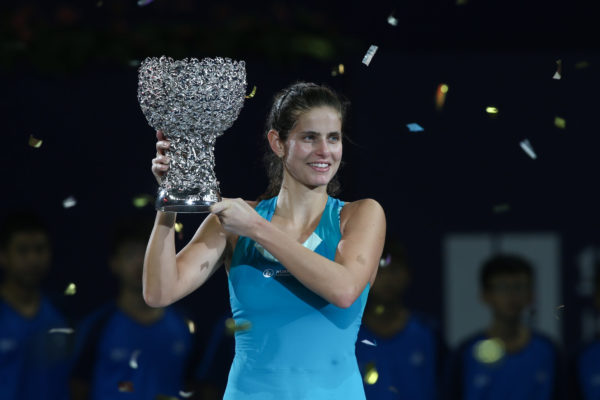 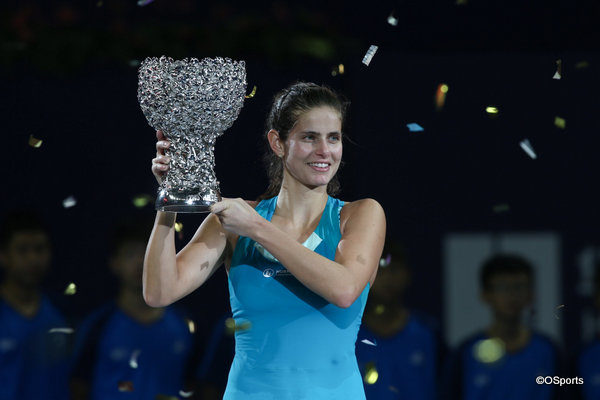 This was the fourth career WTA Tour title for Goerges, her second of this year and her second in succession. Goerges qualified late for the 12-player field in Zhuhai by winning the Kremlin Cup two weeks ago. Her victory in Zhuhai means that she will end this year on a nine-match winning streak and having achieved the best season of her career so far.

Goerges will move up to a career high of 14 in the year-end WTA Rankings and has improved her chances of a Top 16 seeding for January’s Australian Open, the first major tournament of 2018.

“I think there is no better way to end this season,” Goerges said. “It’s been a great season. I have had a lot of tough losses in Grand Slams this year where I had to get over it, but I still continued to work hard and still continued to believe in my team and my work.”

“Well, at the end it paid off, and I’m just happy. I think I have not really any words to describe right now. I think I still can’t believe it a little bit. Well, I probably, when I go back to Germany and really have some days off, it will start to sink in what I have achieved this year.”

“I got two new titles in, yeah, three weeks. Well, it’s just amazing. There’s nothing else to say.”

Thank you for your coverage of the 2017 Hengqin Life WTA Elite Trophy Zhuhai.