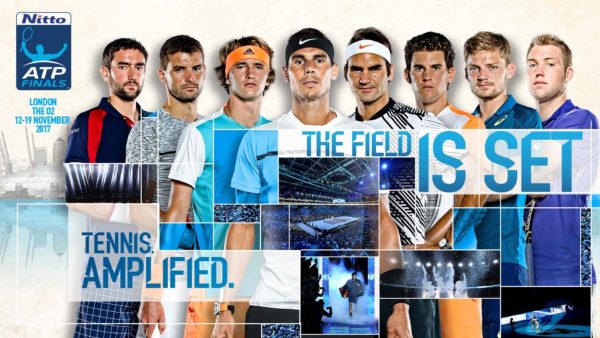 (November 5, 2017) ATP World Tour: LONDON – The eight-player singles field for the 2017 Nitto ATP Finals is set. Jack Sock clinched the final spot at the prestigious season-ending tournament, to be held from 12-19 November at The O2 in London, following a dramatic run to the Rolex Paris Masters title on Sunday.

The 25-year-old Sock, who will make his singles debut at the elite eight-player event, started the final week of the regular 2017 ATP World Tour season at No. 24 in the Emirates ATP Race To London and qualified with his first ATP World Tour Masters 1000 crown. The last time a player secured his Nitto ATP Finals berth by needing to win the Paris title was Jo-Wilfried Tsonga in 2008 (d. Nalbandian).

“There have been a lot of firsts,” said Sock. “It started at the French Open with my first fourth round of a Slam, now I’ve won my first Masters 1000 in Paris, this will be my first time in the Top 10 and this will be the first time making the year-end [Nitto ATP] Finals. So there’s a lot going on right now emotionally and I can’t wait to enjoy it all with my team.”

Sock is the first American to secure a berth at the season finale since Mardy Fish in 2011, having compiled the third straight 35+ match wins campaign of his career. This year, he won three ATP World Tour singles titles at the ASB Classic in Auckland (d. Sousa), the Delray Beach Open (w/o vs. Raonic) and this week in Paris, when he became the first American to capture an ATP World Tour Masters 1000 title since fellow Nebraska native Andy Roddick at the 2010 Miami Open presented by Itaú. The second-youngest player in the Nitto ATP Finals field behind Zverev (20), also reached the BNP Paribas Open semi-finals (l. to Federer) in March.

Chris Kermode, the ATP Executive Chairman and President, said, “Our congratulations to all the players that have qualified for the final showdown of the season in London. They’ve battled across 66 tournaments in 31 countries to earn their place among the best eight qualified singles players and doubles teams of the year in the Emirates ATP Race to London, which is a remarkable achievement in its own right. The stage is now set for a spectacular season finale in front of packed crowds across eight days of competition at The O2.”

2017 DRAW CEREMONY:
The draw for the 2017 Nitto ATP Finals will be made on Wednesday, 8 November.

2017 GROUP NAMES:
The Finals Club, an initiative launched by the ATP in 2015 as a way of celebrating the past champions and heritage of the season-ending tournament since its inception in 1970, will this year honour players from the 1990s. As such, the group names for singles and doubles will honour players who enjoyed remarkable success at the season finale during that decade:

The Nitto ATP Finals welcomes more than 250,000 fans to The O2 arena each year, as well as generating a global TV viewership of more than 100 million, as the ATP’s best eight singles players and doubles teams of the season compete over eight days at the biggest indoor tennis tournament in the world.