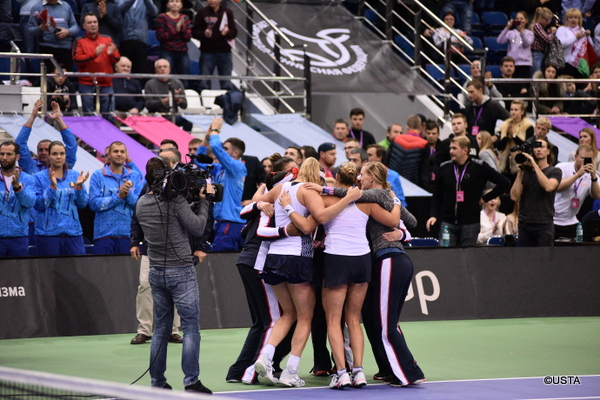 “I really want to thank my teammates for pushing me along. I mean, from Bethanie, to Lauren Davis, everyone that’s here right now behind this table. It was really a team effort. It really shows in Fed Cup.

I might have had wins along the way, but Ali won a lot of matches in Hawaii the first round. I think, to quote Mike Tyson, my back is broken right now. It’s the final

“It was a very tough match. These players were incredible. This was an incredible venue, incredible atmosphere. This is something that we’re going to treasure for the rest of our lives.”

“I knew we were in for a tough match,” said Captain Rinaldi. “I’ve watched your players over the last several years and been following their success. I know how talented they are. They’re in the finals. They beat some very good teams to get here. They have great chemistry.

“We came in knowing that. We came in not underestimating our opponent, but coming in trying to be prepared. It’s a tough time of year, the end of the year. Our players did an amazing job putting their hearts out on the line today.

“I think they’re a very talented young team, as is Czech Republic. I mean, another team that has a lot of young players, as well. So, you know, we’re not only going to face them again in the Fed Cup, but our players are going to face them on the WTA Tour. It’s going to be fun to watch.”

“We’re going to enjoy this, for sure,” Rinaldi continued. “Then we turn around, we play in February.

“I think it’s great. I mean, look, American tennis, American women’s tennis, is thriving and doing well. We have so many great players, so many young junior players coming up the ranks as well, and even younger behind them. It’s pretty exciting. It’s an exciting time.

“We saw the US Open with Sloane taking her first title. We had four American women in the semis, and she played Madison Keys in the finals. Look at Venus, and Serena coming back. Bethanie is going to be healthy again. You just go down the list.

“We have so much history, so many great players, I’m just honored to be a part of it at this exciting time. The last nine, ten years that I’ve been working with the USTA has been just a tremendous honor. I can’t tell you what it means to see these girls reaching their goals, watching them have success. It means so much to me.” 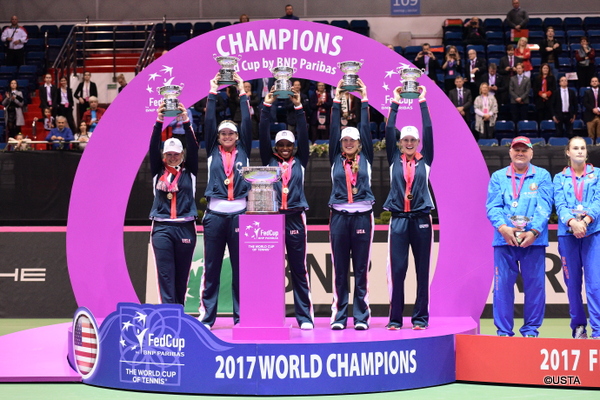 US Open champion and world No. 13 Sloane Stephens battled in another tight three-setter in the fourth singles rubber on Sunday, eventually falling to world No. 87 Aliaksandra Sasnovich, 4-6, 6-1, 8-6.

With the final tied at 2-2, the U.S. found itself in a fifth-and-decisive doubles rubber for just the 12th time since the World Group format was instituted in 1995. It was also the second consecutive tie that went to a fifth-and-decisive rubber after the U.S. won its semifinal in April over the Czech Republic in the doubles match. Both countries made substitutions to their doubles teams. U.S. Captain Kathy Rinaldi elected to pair Vandeweghe with Shelby Rogers, while Belarus named Sabalenka and Sasnovich to play the doubles.

In the end, Vandeweghe and Rogers clinched the victory for the U.S. to bring the Fed Cup trophy back to the United States. The duo defeated Sabalenka and Sasnovich, 6-3, 7-6(3).

Captain Kathy Rinaldi had a very successful year in her first year as U.S. Fed Cup Captain, as well. Rinaldi is the first Fed Cup Captain since Marty Riessen in 1986 to win the Fed Cup title in their debut year. Rinaldi was named the 19th U.S. Fed Cup Captain on December 8, 2016, succeeding Mary Joe Fernandez after eight years at the post. Rinaldi currently serves as Lead National Coach, Team USA – Pro Women for USTA Player Development, focused on helping American pros achieve Top-100 rankings. She has coached the U.S. to multiple junior international team competition titles and coached the U.S. women in the Pan-American Games in 2015. Rinaldi was ranked as high as No. 7 in the world in singles (May 1986) and No. 13 in the world in doubles (February 1993).

The United States was drawn to play away in the Netherlands for the 2018 World Group First Round when the draw took place in September, but the USTA choose to exercise its right under new Fed Cup regulations to host its first round tie. Under regulations that came into effect from the International Tennis Federation in August, the finalist nations in the 2017 Fed Cup Final (the U.S. and Belarus) were given the option of hosting their 2018 first round ties.