(November 16, 2017) Jack Sock became the first American since Andy Roddick in 2007 to reach the final four of the ATP finals, by defeating No. 3 Alexander Zverev 6-4, 1-6, 6-4 to advance from the Boris Becker Group in round-robin play. Sock ended group play with a 2-1 record. He’ll play Grigor Dimitrov for a spot in Sunday’s final.

“I didn’t expect to be in London in the first place,” Sock told media. “To be here was a good achievement given the way my second half of the year was going.

“(Winning) Paris was a big step for me. Now to put myself in the position to play on the weekend is another big step forward, another confidence booster.

“Some hard-fought matches the last few days. Just fortunate to get through.”

“Obviously when you sneak into the eighth spot the week before, three days before the event starts, it definitely takes some nerves away. If I had locked in a spot in Shanghai and I knew for five weeks that I was going to be here, I can do this, I can do that. When I’m looking at flights home in Paris, now I’m taking a train to London after the event, so…

“Yeah, I’m coming here playing my style of tennis, having fun, hitting some stupid shots that work sometimes. But just enjoying the time for sure and really having a good time.”

Sock talked about playing Dimitrov next: “I played Grigor a few times. He got me early on when we played. I’ve been able to get some wins against him. Obviously I think he’s a little bit different player since the last time I played him. I think he’s really kind of found his game, what exactly he wants to do out there. It’s showing throughout the year. He’s playing deep into tournaments almost every week, really establishing himself in the top 10, maybe in top 5 now, I’m not sure.

“But once again, I’m playing with a lot of confidence as well coming off Paris, playing here, winning some of my matches, getting into the semis.

“You never know what can happen.” 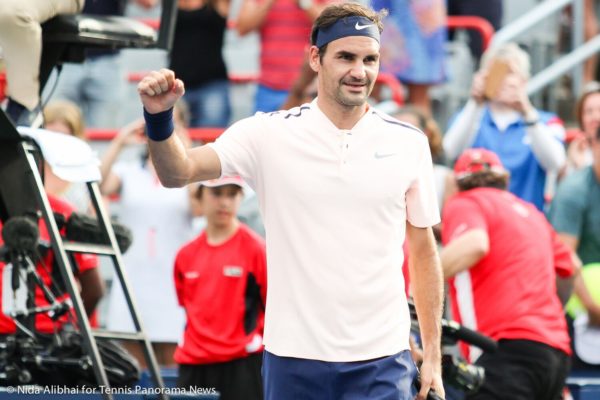 In earlier action, a re-match of the Wimbledon final, Roger Federer completed group play with a 3-0 record beating Marin Cilic during the day session 6-7(5), 6-4, 6-1. Federer will play the winner of Friday’s Dominic Thiem – David Goffin match in one of Saturday’s semifinals.

“It wasn’t easy,” said the world No. 2. “It wasn’t easy. I mean, look, it’s a fast court. It’s indoors. We’ve seen it now: when you miss a few too many opportunities, uhm, you can really pay the price at this tournament. So we’ve seen some swing of momentums in a lot of the matches this week.

“I think in the beginning I was slightly overaggressive in the first set on some crucial points rather than maybe being patient. I was able to turn that around, you know, late in the second set. Then just had a much better feeling in the third set.

“Maybe also Marin’s level dropped, I’m not sure. But definitely was dangerous there for a while, you know, being down a set and breakpoints beginning of the second set.”

Cilic will end the year at No. 5, a goal he set for himself for this year. “I think I played extremely consistent throughout the season, especially starting from the clay court season,” said the Croat.

“Overall I felt that my level has come to a new level. So hopefully even more next year, I can aim a little bit higher. Where is that going to be? You know, I’m not sure. But hopefully I’m going to be in a position to challenge the top guys and to be in contention for Grand Slams.”

“This is the first season for me that I started in top 10 and finished in top 10. That just shows the consistency level. I’m very much aware of my game, that even though, for example, in this year I didn’t start so well, I didn’t lose faith. So I played really well that middle patch of the year.

“So, you know, hopefully for next year I’m going to be even better throughout the full season. That’s going to give me the chances, you know, to play the best guys on a Grand Slams and to perform over there the best.”

“I’m just happy I’m playing a great season,” said the 36-yearold. I’m so happy that I was able to reach this level of play and still being able to play also at the end of the year. It wasn’t just, like, one tournament at the beginning, then nothing after that. So it was just throughout I’ve had a great year.

“I have no regrets because I totally over-exceeded my expectations. Just happy I’m injury-free and healthy right now, enjoying myself still.”