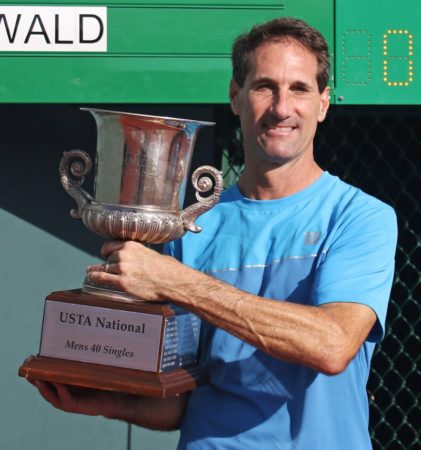 Playing before a large crowd on Court No. 1 at the La Jolla Beach & Tennis Club, the 51-year-old Greenwald overcame hard-serving David McNamara of Delray Beach, Fla., 3-6, 7-5, 6-3 in two-hours and 13 minutes.

The top-seeded McNamara, a former touring professional who reached a career-high ATP World Tour singles ranking of No. 431 in 2002, used his powerful serve to jump out to a quick 4-1 lead in the opening set. He lost only a single point on serve and also broke Greenwald’s serve in the second game.

Even though Greenwald held serve twice to close the lead to 5-3 in the first set, McNamara once again used his big serve to battle back from 0-30 in the ninth game and won four straight points to put the set away.

In the second set, with Greenwald picking up the level of his serve, both players remained on serve until the 12th game when Greenwald scored his first service break of the match at 6-5 to win the set and level the match at one set all.

Later in the third set, McNamara served at 3-4, but as he faced two break points at 15-40, he sailed a cross court forehand long to give Greenwald a service break and a 5-3 lead. In the very next game, Greenwald served out the match to successfully defend his singles title.

“I haven’t seen a first serve like that in a long, long time. Adjusting to that and finding a way to manage that was very, very difficult,” Greenwald said. “It put a lot of pressure on me and it forced me to go for more on my first serve. I served well, and that made the difference for me today.” 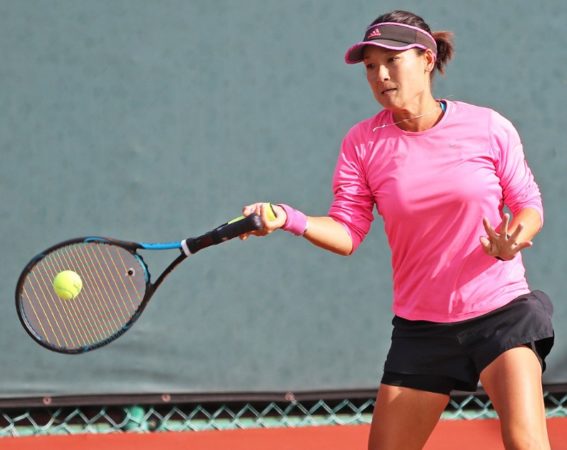 Playing on Court No. 1 at the La Jolla Beach & Tennis Club, Sasano and McBride, who were meeting in the singles final for the second straight year, exchanged service breaks early in the opening set and remained on serve until the 11th game.

At 5-5, Sasano gained the upper hand with a critical service break and then went on to serve out the first set, which took 50 minutes to complete.

After a short break following the first set, Sasano took advantage of two double faults by McBride and broke serve to start the second set. That was all Sasano needed as the defending champion built a commanding 4-0 lead.

McBride held serve in the fifth game of the second set, but Sasano, playing with confidence, held serve to increase her lead to 5-1 and then broke McBride at love in the next game to close out the match in one-hour and 20 minutes.

“I’m just enjoying the moment. It was fun. I played well and had a great week. I kept focused, that was the main thing,” Sasano said after the match. “In the first set I wasn’t patient and I wanted to end the points a little too quick, so I just told myself to be more patient.”

After two entertaining semifinal matches, the pairing for Sunday’s men’s singles championship is set. Top-seeded David McNamara of Delray Beach, Fla., will meet third-seed and defending champion Jeff Greenwald of San Anselmo, Calif., for the title. The men’s singles final is scheduled to begin not before 10:30 a.m. (PST).

In the men’s semifinals, Greenwald outlasted second-seeded Samuel Schroerlucke of Memphis, Tenn., 4-6, 7-5, 6-4 in two-hours and twenty minutes, while McNamara won the last five points in an intense third-set tiebreaker to slip past fourth-seeded Stuart Duncan of Laguna Beach, Calif., 6-3, 1-6, 7-6 (4) in two hours and one minute.